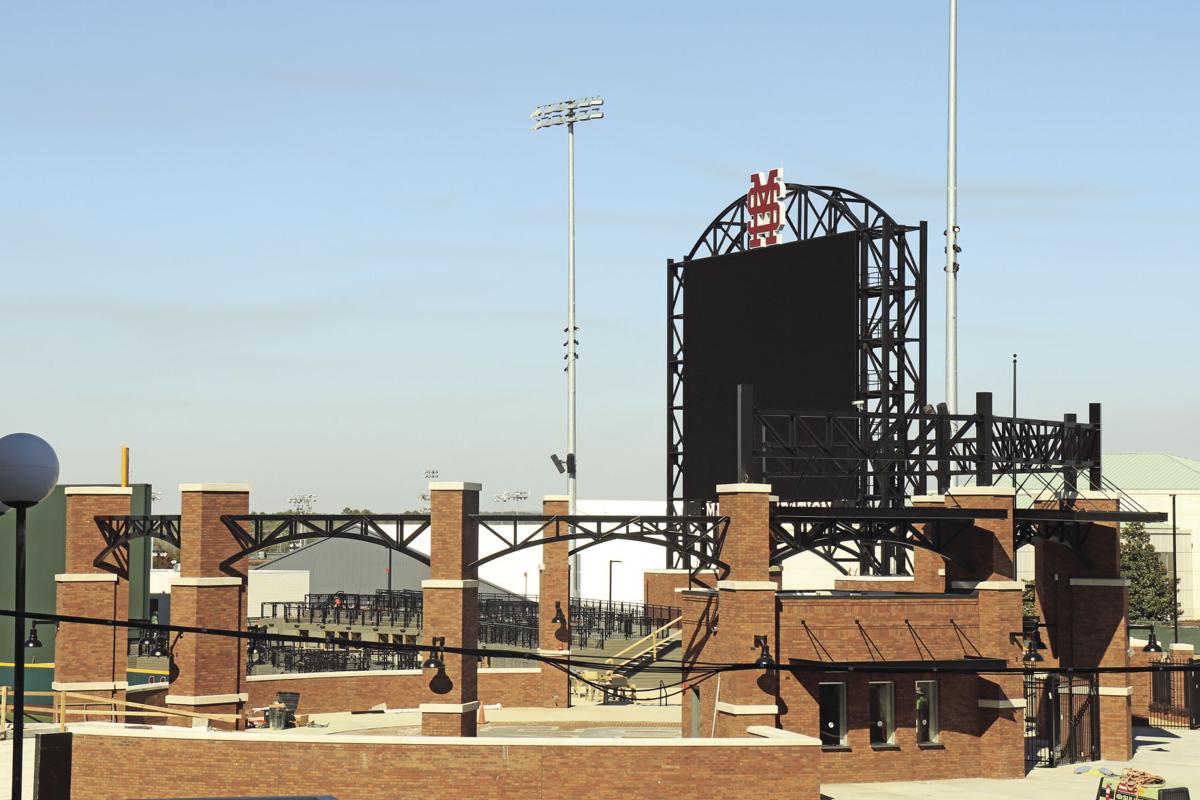 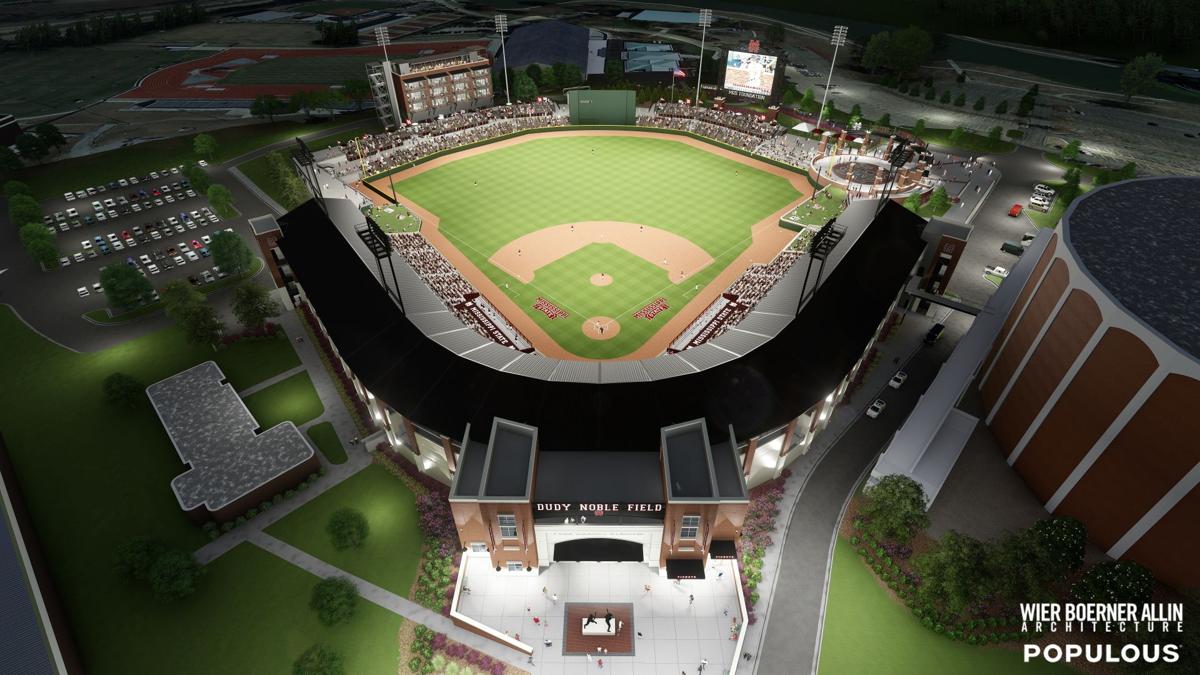 A graphic rendering, made by Wier Boerner Allin Architecture, of what the new Dudy Noble Field will look like once it is completed for the 2019 baseball season. Find more on Hailstate.com.

Baseball fans will get their first glimpse at Mississippi State University’s $55 million dollar project this spring as the MSU baseball team takes the field at the partially-completed stadium this season.

The project to renovate Dudy Noble Field was unveiled in August of 2014, and MSU broke ground on the stadium last summer. Due to the size of the project, MSU was unable to complete it in one offseason, therefore the 2018 baseball team will play in a partially-completed, but operational stadium.

However, they will spend the first month of the season on the road to give Jesco Construction more time to work on the stadium. Once completed, head coach Andy Cannizaro believes the stadium will be one of the best in all of baseball, not just at the collegiate level.

“When this thing is done, it will be the finest facility in the history of college baseball,” Cannizaro said at baseball's opening night banquet. “Our players will not play in a finer facility until they play on the big leagues one day; and then it will depend in which of the big league stadium they are playing in, because if it is one of the older ones, it will still not be as nice as the new Dudy Noble.”

MSU plays a total of 23 home games this season, and their first will not be until March 5 against New Mexico State University.

“If you look around the country, when these types of projects have been done, it has been virtually impossible for schools to play through the progress of construction,” Cohen said in a phone interview. “Instead of your time driving hundreds of miles to play, our team will be able to play in Dudy Noble, eight months into construction, which I think is incredible.”

MSU announced details in a press release sent out last October, including the expected capacity this season, which is around 9,000. The old stadium had 7,200 seats but has held over 15,000 for a game. When the new stadium is completed, it is expected to have around 13,000 seats.

Many consider baseball to be the most important sport at MSU, and building the new stadium is a very delicate task with a lot of tradition to consider. The athletic department picked a firm that understands the importance of baseball at MSU in Wier Boerner Allin Architecture.

While not the athletic director when the architecture firm was picked, Cohen had high praise for the Wier Boerner Allin Architecture's work.

“The amount pride that Wier Boerner Allin has in this project is just nothing short of phenomenal,” Cohen said. “They have gone above and way beyond the normal service that an architecture firm provides.”

Fans will have to wait another year for the finished product in 2019, but MSU has to play this season, and Boerner outlined what will and will not be open in 2018.

One of the more iconic parts of the new stadium is the right field entrance. Brick pillars mark the entrances in a semicircle on the parking lot side of a full circle that serves as the base of the entrance. The brick circle will have the baseball M-over-S logo in it. It will be ready for 2018.

It also provides MSU a small home-field advantage. The other side of the circle serves as the corner of right field. It is a curved wall, meaning the ball bounces off differently than if it were a straight wall like most stadiums.

“Not only is this important for the entry, but we brought it into the field of play a little bit when we added a 15-foot wall that encroaches into the outfield and is a curved wall,” Boerner said.  “MSU will be practicing on it on a daily basis, but visiting teams, they are not going to have that advantage of how is that ball going to bounce off that curved wall.”

The other main entrance is the home plate entrance facing Highway 12. The entrance will have an arch with two large brick towers on either side. The name, Dudy Noble Field, will go above the arch in giant letters. The entrance will not be totally complete for 2018 but will be operational.

“This is to be the iconic entry for the ballpark,” Boerner said. “You will be walking between some statues that we believe will be ready for the 2019 season.”

The club level, or the upper deck of the stadium, will not be complete until 2019, so a majority of the chair-back seating for 2018 will be in the lower bowl. The stadium is designed to be almost on top of the field. The wall behind home plate is shorter than it was in the old stadium. At the banquet, Boerner mentioned how they were “putting the fans on the field” multiple times.

The part closest to the field will be the Triple Crown Club, similar to the Gridiron Club at Davis Wade Stadium. It will be a club level behind home plate and will be level with the field. It will not be open for 2019.

“We have taken seats down to the field level, and above it we pull the view level up where it towers over the field,” Boerner said. “It is going to be intimidating for those visiting player, the fans are right on top of you.”

In between the center of the stadium and the outfield corners are berms. Berms are a path or grass strip sloping toward the field. The berms are for general admission and are designed for families to set up blankets or people to set chairs on.

“Right next to the seats, we have a tiered berm,” Boerner said. “Not only is it tiered with a ledge you can sit on, you are sitting on top of the visiting bullpen. It is going to be a very intimidating place for these visiting pitchers to warm-up.”

The berms will be open this season.

The new lounges will be two rows of wooden decks. The decks will have power,  running water in the outfield every 60 feet and each dedicated storage space.

The boxes are customizable and there will be an official “Move-in Day” prior to the first home game of the 2018 season.

“We have the best fanbase in the country, and we anticipate that these individual lounges are going to be designed and decorated with a lot of unique factors and seats and signs and grills to bring back that character,” Boerner said.

Between the lounges, the berms and the concourse, it is clear the goal was to get a great view for every fan in the stadium when the record-breaking crowds show up. MSU, as a fanbase, holds all 10 spots of the top 10 on-campus attendance records in the country. Cohen said they had those fans in mind when building the stadium.

“I think the best about this facility is that it is wonderful for the players, and anything you do for the program helps recruiting, but it is really a homage to our fans,” Cohen said. “We built this with specifically our fans in mind. We want our fans to be comfortable, we want our fans to have the best possible vantage point of a baseball game. I think in 2019, they will see a facility that is very fan friendly.”

The Left Field Lofts, which will be two-bedroom, two-bathroom apartments behind the Left Field Lounge, will not begin construction for another couple months, Boerner said. The lofts will have 12 units and a rooftop capable of holding around 250 people.

Overall, Cohen said he feels like the project is ahead of schedule, and Boerner complimented Jesco Construction and the University for their work on the project.

“These guys are dedicated and they are going to get this thing done, which is a tall task. This is a big project,” Boerner said. “They are doing a heck of a job, and we have had a great experience working with the university on this. It has been an honor working on this project since 2013 and we are confident it will be the best ballpark when it is all said and done in 2019."