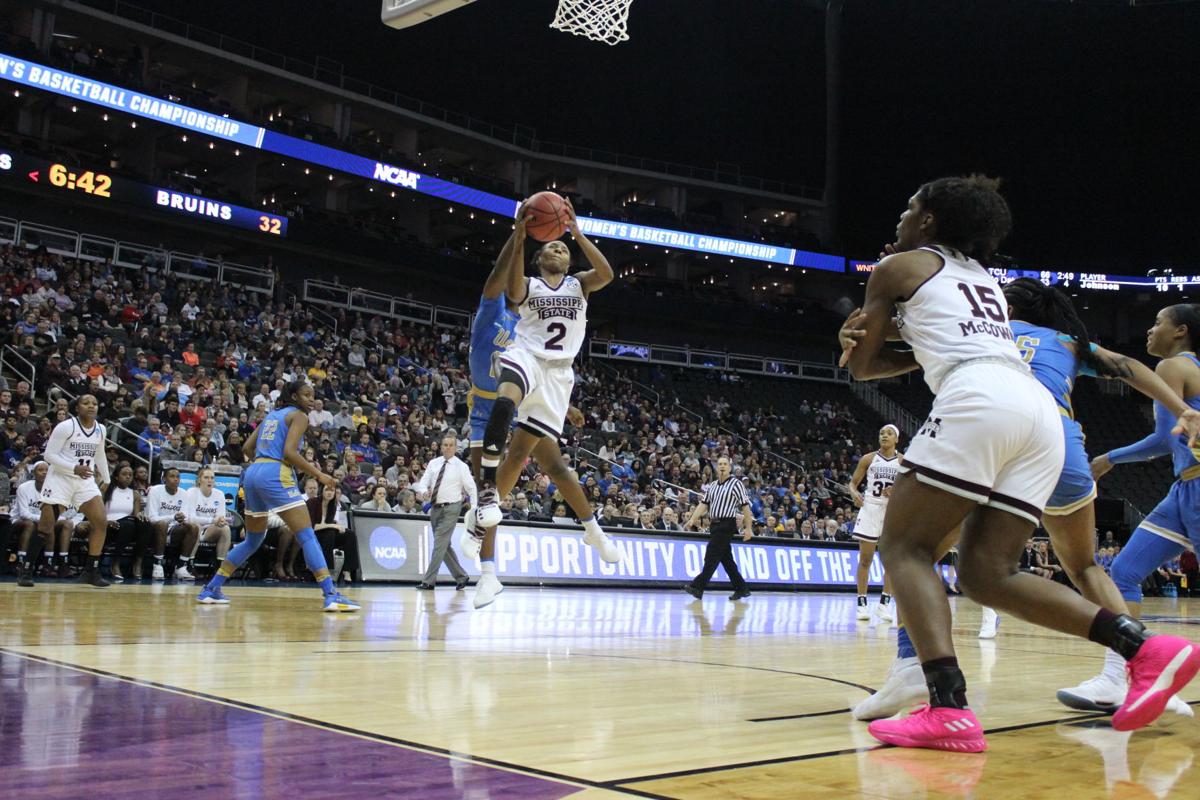 Morgan William attempts a lay-up in traffic in MSU's 89-73 win over UCLA. 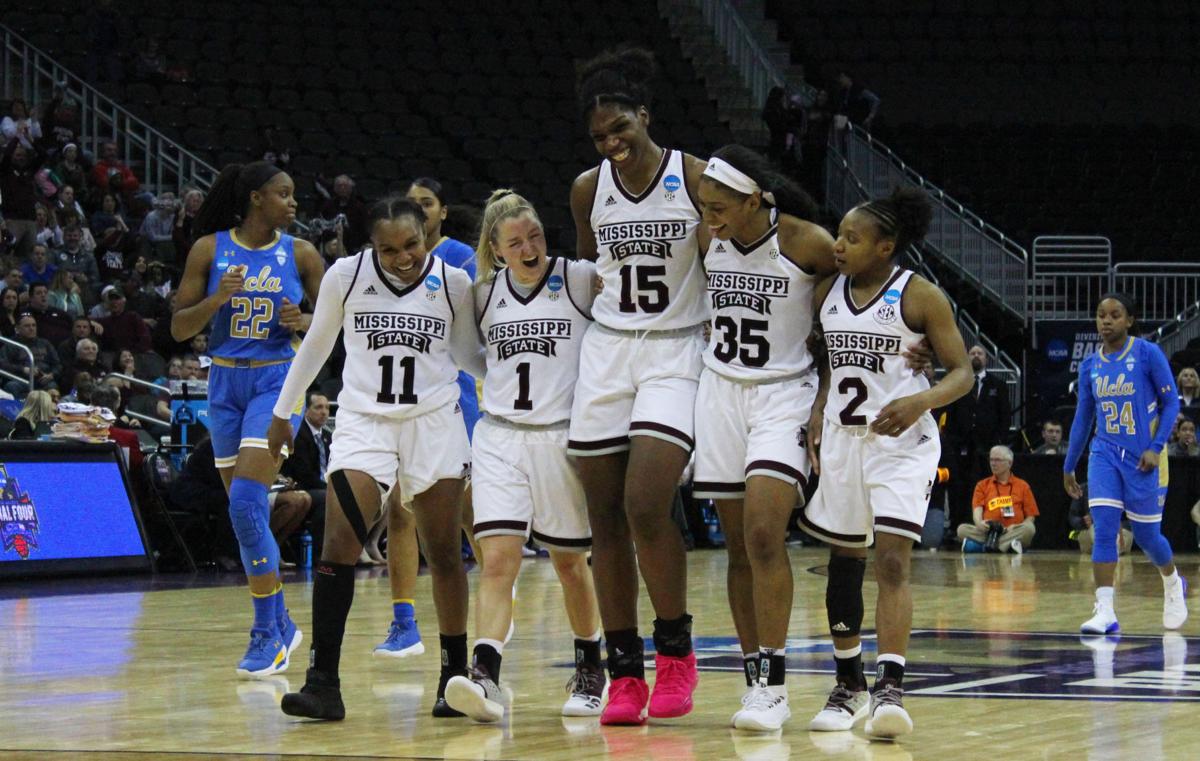 The starters walk arm-in-arm as Teaira McCowan steps up to take free throws.

One-seed Mississippi State University (36-1) had the 3-seed University of California at Los Angeles (27-8) standing in their way to a spot in the final four in Columbus, Ohio.

Vic Schaefer was congratulatory of UCLA who lost 89-73, and also said he was thankful for the senior class who won their 125 game.

“Just want to congratulate UCLA on a tremendous year, I have been up for two nights having visions of Jordan Canada and No. 25 running up and down the floor,” Schaefer said. “Those kids have developed so much, and they really challenged our kids. I thought that UCLA played so hard, but giving God the glory for (win) number 36 today.”

Teaira McCowan, a junior from Brenham, Texas, led MSU with 23 points and 21 rebounds. She reached the 20 points and 20 rebounds mark with 27 seconds left in the game as MSU started to pull away from UCLA.

McCowan found her confidence and calmness during a timeout when UCLA cut the game to six points.

“We were fine and we did not need to get rattled,” McCowan said. “We have been in that situation before where we kind of got rattled. We didn’t get out of our bodies and get rattled.”

Victoria Vivians, a senior from Carthage, also stepped up, delivering 24 points. All but one of the starters scored 10 or more points.

“They were trying to deny me the ball and if they do that, the backdoor is going to be wide open,” Vivians said. “The first time was my fault because I did not go to throw, and the second time it worked fine. Coach was saying they could not guard me. Just try and go to get a bucket and lay it up.”

The Kodak moment of the game was when the seniors and McCowan walked to the free throw line with their arms wrapped around each other. Morgan William, a senior from Birmingham, Alabama, explained the moment.

“In the huddle, the ref was like 'can we go ahead and go?'” William said. “So I was like, 'let’s walk and talk,' because they were trying to hustle us up and get to the free throw line.”

Schaefer talked about how much his team changed offensively from the year prior, as the team showed they could attack the goal with different players, and score points as a team like the Golden State Warriors.

“We are just different because of our skill set, we have got kids who can stretch it and shoot it, and you got the big piece inside,” Schaefer said. “This team is special. And then you got Morgan, who all of a sudden has decided she is excited about scoring. I have walked off the court a few times and said this is what it’s like to have Golden State.”

After the trophy was lifted and the nets were cut, coach Schaefer went over to the band and thanked them for coming and supporting the team. He thanked the fans for coming to the game, and told them they need to buy their tickets for Friday.

“All of our fans are just the best, if we were not here today, that arena would have been empty,” Schaefer said. “It is just incredible how our fans' support has grown and mushroomed, and we love them we care about them so much. For us right now, they are very special, all of them are. The fans, the band, cheer and the whole nine yards. They are passionate about their university and that is what makes it so so special.”

MSU will take on 1-seed University of Louisville Friday, in Columbus, Ohio, for a chance to play for National Championship. Teaira McCowan and Victoria Vivians both made the all-tournament team for the Kansas City Regional.

Reflector has been identified for the success of the people. The use of the reflection and best essays has been inquired for the true knowledge for the humans.