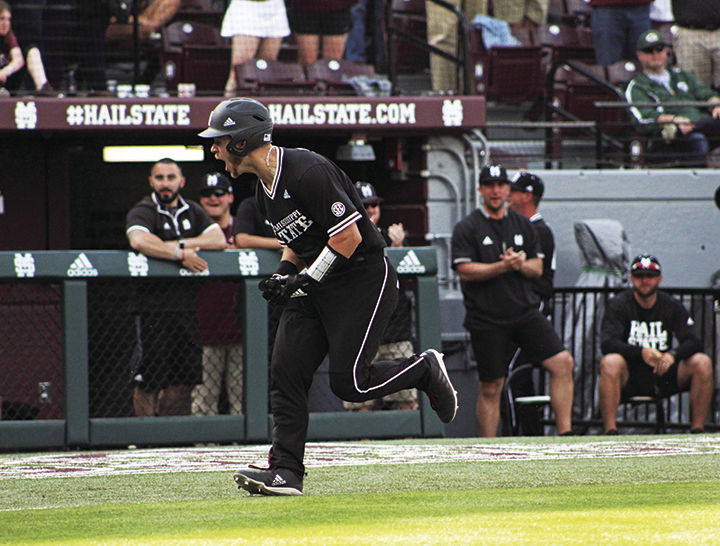 Junior catcher Dustin Skelton runs back to home after he hit a home run in the final game of the Auburn series on March 24. 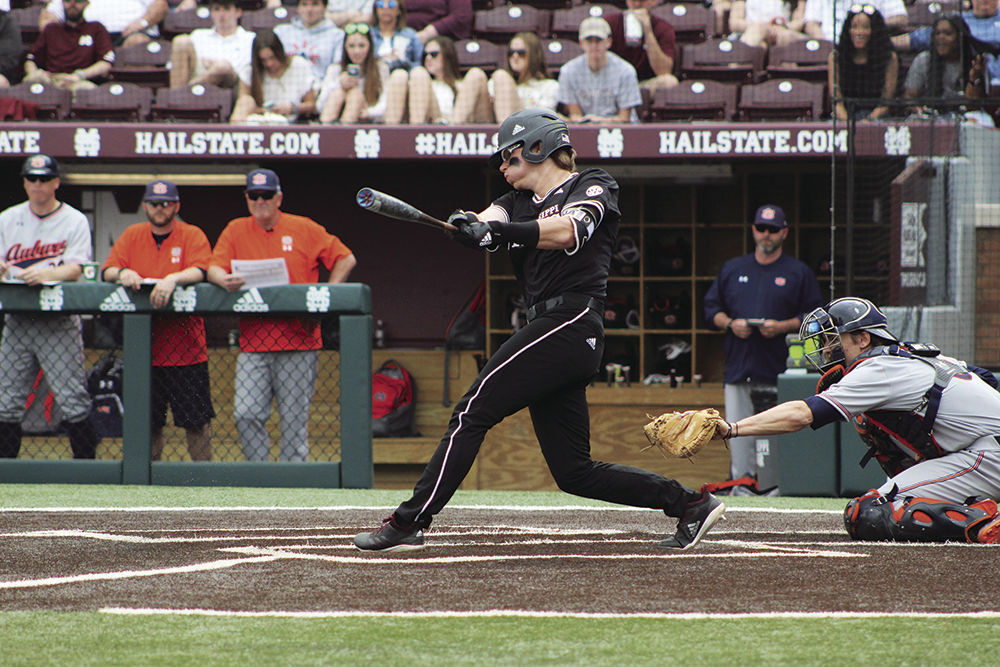 Sophomore Rowdey Jordan gets one of his three hits in MSU’s 20-15 win over Auburn on Sunday.

Junior catcher Dustin Skelton runs back to home after he hit a home run in the final game of the Auburn series on March 24.

Sophomore Rowdey Jordan gets one of his three hits in MSU’s 20-15 win over Auburn on Sunday.

Mississippi State University's (22-3, 4-2 SEC) fans chanted "Rowdey, Rowdey" as Rowdey Jordan, a sophomore infielder from Auburn, Alabama, stood on second base. Jordan provided one of the many sparks that gave MSU the 20-15 win to secure the series' victory.

The game was pretty rowdy, too, as there were three lead changes, 35 runs and 42 hits. Auburn had a five-run lead after scoring seven in the fourth inning, but MSU would retake the lead in the eighth inning that saw five runs come across the plate.

MSU head coach Chris Lemonis said his team never wavered as they rallied to come back from a five-run deficit.

"They played for each other and they just stayed engaged," Lemonis said. "A lot of times, you will see a team back off and put their heads down. This team does not have that about us."

Every MSU player who batted in the game got a hit, and every single one had an RBI as well. They also scored at least one run in every inning of the ball game.

Jordan said the atmosphere in the dugout was both crazy and positive, as the players battled to get back into the game culminating in a five-run eighth inning to take the lead and finish off the game.

"It was positive even when we went down, it was just keep chipping away, a lot of baseball left," Jordan said. "It was just a positive vibe."

Dustin Skelton, a junior catcher from Olive Branch, stepped up to the plate, swung and crushed a ball to the left center wall. The centerfielder made a desperate attempt, leaping to catch the ball, but could not grab it as Skelton delivered a three-run homer to give MSU a 20-15 lead.

Skelton said he had only played in one game like this last year when the Bulldogs won the first game of a super regional against Vanderbilt. The Bulldogs won that game by a score of 10-8 as Elijah MacNamee hit a walk-off home run to win the game.

"Last year at a super regional, we were at Vanderbilt, that was just unreal," Skelton said. "I told coaches that, 'I don't know (if) I will ever be in a game like that again,' and here we are."

Lemonis said the only thing that surprised him about his team in the game was their struggles with pitching, giving up 15 runs on 21 hits in the game. The team is going into their third SEC series and they continue to do the same thing.

"They just keep going out and playing," Lemonis said.