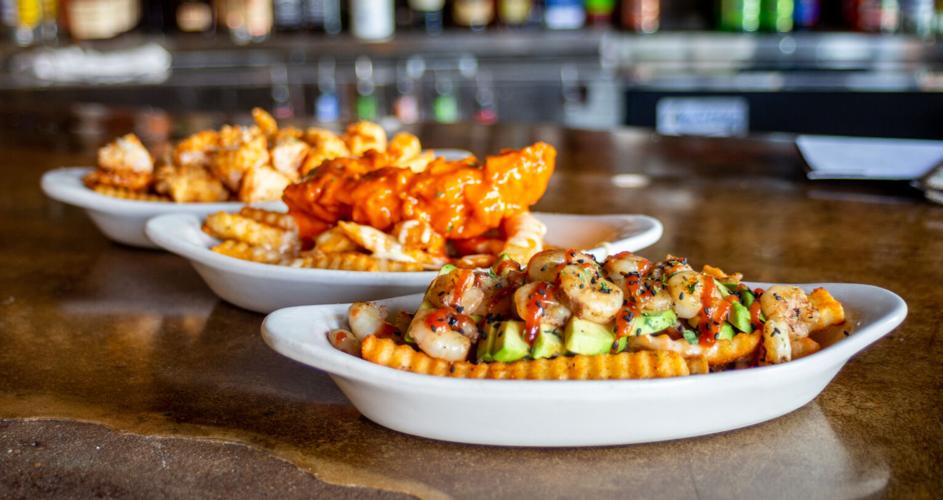 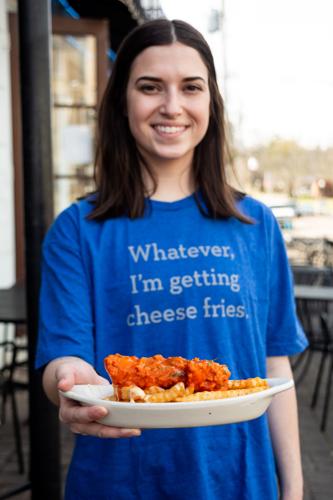 We set out on our mission on a Wednesday afternoon, beginning the journey at the Bin 612. This would be our first stop of six with a mixed bunch of past and current editorial staff as the judges. The fries would be judged based on four categories ranked on a scale of one to five: cheese taste, fry texture, fry taste and an overall rating.

Bin 612's crinkle-cut fries come served in a white ceramic dish with liquid white cheese, slightly sweet seasoning and seemed to be chopped parsley on top for the price of $5. Reviews were mixed.

"I had an out of body experience tasting this cheese," Online editor Joshua Britt said.

Others on the crawl agreed, while myself and a few others were not as swayed. Managing editor Joshua Stewart and former photography editor Adam Sullivan claimed the seasoning to be "overpowering," so perhaps their signature seasoning is not so signature after all.

The next stop on our crawl was The Little Dooey, which is not too far up the road. The first thing you smell walking up to the eatery is barbecue, naturally. Despite—or perhaps due to—high expectations, I found these to be the most underwhelming cheese fries of the crawl.

The waffle cut cheese fries, which we had topped with pulled pork and bacon were presented on a Styrofoam plate for $10.99. The meats themselves were good, but the fries beneath it were smothered. The cheese ratio was off in proportion to the rest of the plate's serving, and any hope of crunch from the fries was suffocated by the toppings.

"They were difficult to eat and did not have near enough cheese," Blankenship said.

After a somewhat unsatisfying experience at The Little Dooey, we walked across the street to Humble Taco for our next taste test. Our waiter was none other than current opinion editor, Luke Copley, who got to join the crawl for one stop. He gave us some chips and salsa as a palate cleanser between dishes. Side comment for Humble: please add some more cilantro, jalapeños or something to the salsa, it tasted like cold tomato soup.

The $5.95 steak-style fries came topped with their house-made queso and Mexican seasonings on a thin ceramic plate. The cheese was divine, but the fries did not satisfy me, and the seasonings did not add much flavor.

News editor Payton Brown disagreed and offered her humble opinion on the dish.

"The fries were kinda stale, but the seasoning was grand," Brown said.

After paying 50 cents for parking a little up the street in hopes of not being towed at College View, we entered the StaggerIn Sports Grill. Upon entering, I was met with rock music which then rolled over to Hank Williams Jr.'s "Family Tradition." I hope food crawls become a Reflector family tradition following this.

We had gotten weird looks and questions of "Are you sure?" during this crawl while only ordering a singular order of fries, but the waitress at StaggerIn was unfazed and described the serving size akin to "a tub." She placed it on our table about 10 minutes later and a tub it was! For $7.99 we were blessed with a vat of delicious gooey crinkle-cut fries topped with bacon. These were my favorites.

"The cheese had a little kick, but I wish they had some without bacon," Harrison said.

Stewart was surprised with the sports bar's entry to the crawl contest.

The next stop was another bar! Dave's Dark Horse Tavern offers its own competitor for $9.99. These were our first fries with potato skins on them, which was admirable, though not successful. The cheese was excellent, and I think these may have taken gold had a different type of fry been paired with it.

"The cheese is awesome. The fries are a travesty," Britt said. "I don't like the texture at all."

Last stop for the crawl was Oby's, where we were mistakenly given Rotel cheese fries after we failed to ask for the "Ultimate" cheese fry experience. These were $8.75 and tasted exactly how you would expect. A waffle-cut fry with Velveeta style cheese and Rotel poured on top. However, I will say the waffle-cut fries here were far better than the previous attempt and had a lovely crunch. I have had the Ultimate Fries before and believe they would have been in the top three if not for the mix-up.

And the winner of the cheese fry crawl is Bin 612!

Honorable mention to Dave's and Humble Taco who were tied for best cheese, Stagger In for best fry and best overall value for your money. This was a great experience, and hopefully helps improve the cheese fry scene in Starkville even more. Thanks for crawling with us!