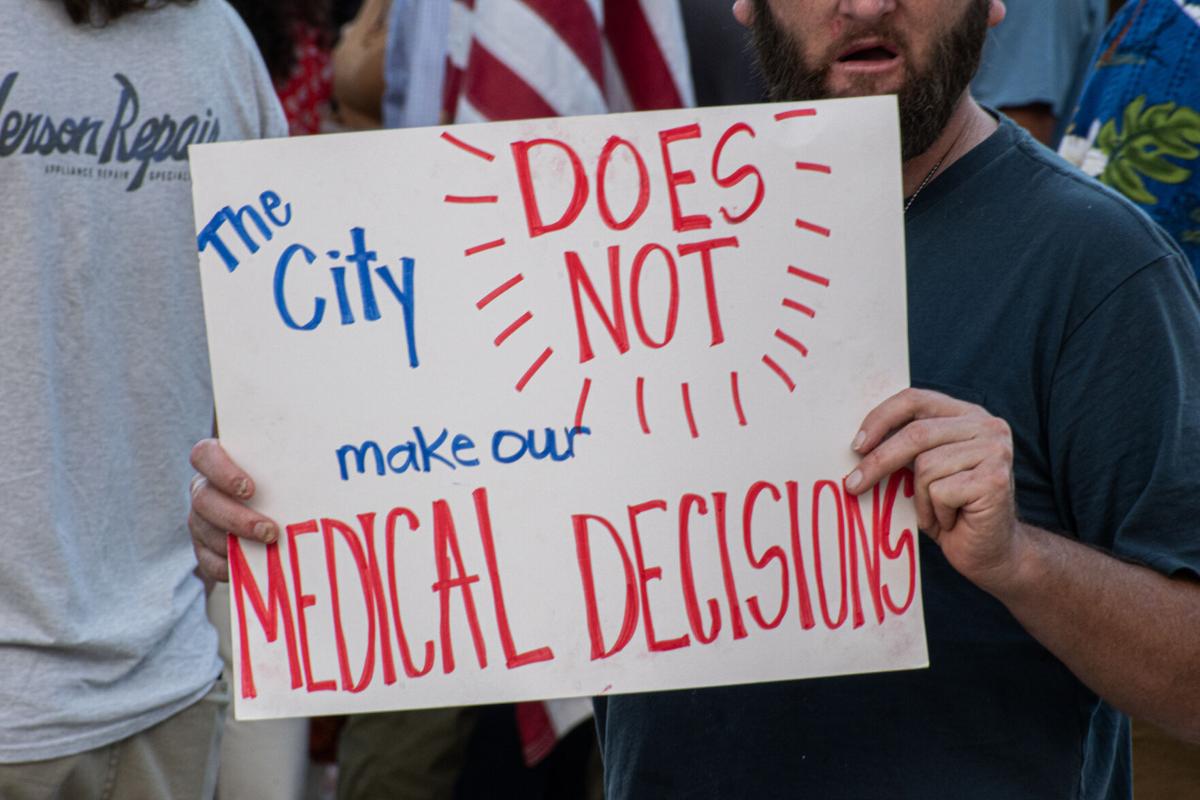 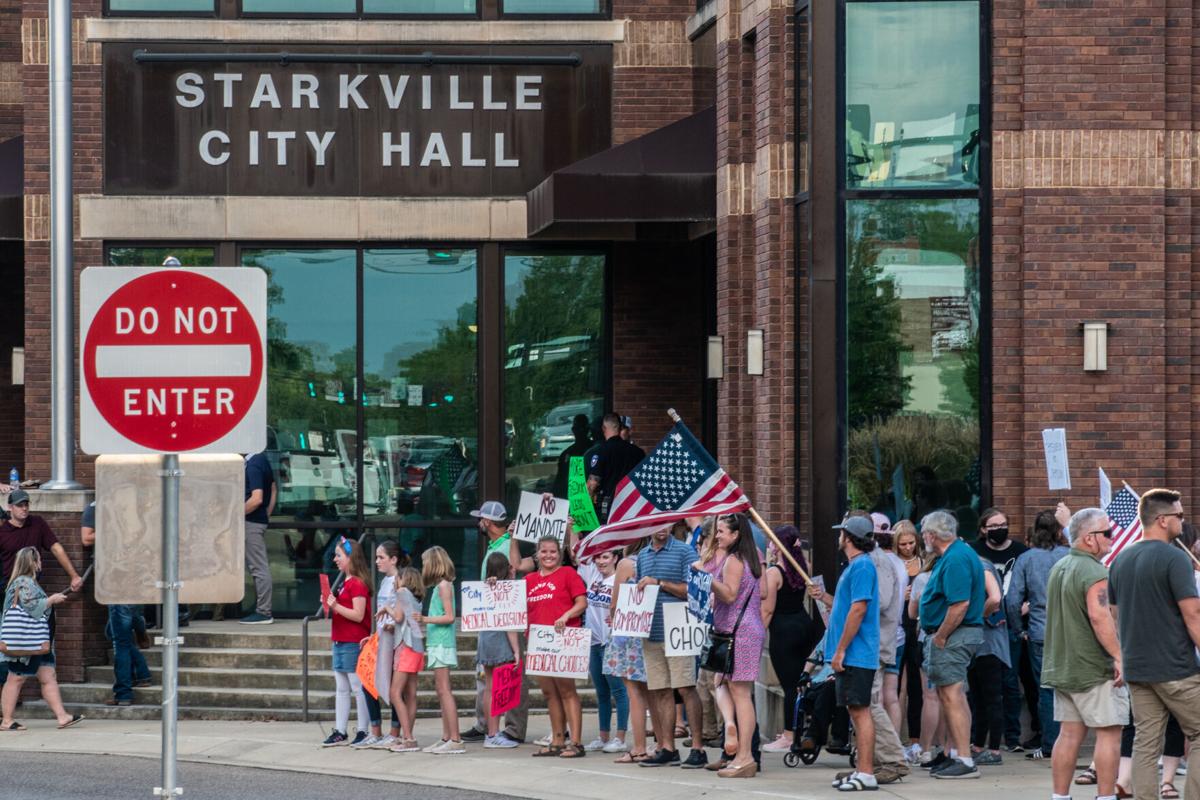 Tuesday afternoon, a crowd gathered outside Starkville City Hall to protest Mayor Lynn Spruill's policy (page 161) to encourage the COVID-19 vaccine for city employees. The medical freedom protestors, as they called themselves, stood in defense of citizens' rights to choose whether or not they get vaccinated.

At the time of the board meeting, citizens were protesting against a rumored COVID-19 vaccination mandate Mayor Spruill was alleged to introduce that evening.

Instead of the mandate, the Board of Alderman voted on a vaccine policy. The new policy gives guidelines for both vaccinated and unvaccinated workers. For unvaccinated workers, they must wear a mask indoors and social distance when possible. If they contract COVID-19, the workers will use their sick days to quarantine for the 10-day period. Additionally, those who are unvaccinated must provide a negative COVID-19 test each week before they are allowed to work.

One of the protest organizers, Savannah Eriksen, a local swim coach living in Sturgis, Mississippi, is a Starkville native. She said she wanted to stand up for her friends who were city employees to fight for their right to make their own medical decisions.

Eriksen said she was against any mandates or policies like Spruill's and is a supporter of freedom of decisions. The protest organizer's goal for the night was to show Mayor Spruill many people disagree with her proposed order.

"The city does not get to dictate the medical decisions and lives of so many people," Eriksen said.

Eriksen continued, saying many city workers will resign if the mayor enforces a mandate because some employees do not wish to get the vaccine.

Chad Scott, a warehouse worker in Starkville, said he was worried Starkville's board would force all citizens to get the shot after ordering the city employees. He said he does not trust the vaccine, and he does not support the mandate for that reason, too.

"Our freedom is more important than a federal grant," Scott said.

Eriksen was also adamant about her support of medical freedom in the U.S., another reason she decided she wanted to organize the protest, she said. She often stood by a group of young girls at the rally and urged them to shout for medical freedom.

Joining Eriksen and the girls, medical freedom advocates of all ages chanted "Freedom of choice!" and "No mandate!" and waved signs that read "God is my direction," and "Mandates are not laws." As cars drove by, some drivers honked or waved, while others did not even glance over at the crowd on the city hall sidewalk.

While dozens protested the vaccine mandate, pockets of people calmly stated their support while waiting to speak about other issues at the packed meeting.

Josie Nasekos, a junior environmental economics and sustainability major at Mississippi State University, decided to attend the Board of Aldermen meeting to speak out against a couple of recent decisions the board discussed. She said she was in support of the vaccine mandate and thought the medical freedom protest was unnecessary.

"Personally, I do think that everybody has the right, obviously, to protest if they see fit," Nasekos said. "I find it a little odd to protest a supposed vaccine mandate for city employees since vaccine mandates for city or government employees are commonplace across the country."

The student said vaccines, like chickenpox and measles, are mandatory for city and government employees in the U.S., so she did not understand why the COVID-19 vaccine mandate had a large pushback.

The city board meeting began, and while the room was packed, others waited in the lobby and outdoors before entering the forum. Outside the walls of city hall, protestors, concerned citizens and MSU students stood downtown in hopes of the board acknowledging their ideas.

Joe Diaz, a Starkville firefighter and EMT at Pafford Medical Services, spoke to the Board of Aldermen at the meeting. His statement urged the city not to enforce the proposal because he and many others do not want to receive the COVID-19 vaccine, and their employers will terminate them for their refusal.

"Those who stand up to the potential COVID policy will be doing what they feel is right according to their God and their conscience, and therefore, will stand without fear," Diaz said.

Diaz's statement mentioned forgiveness multiple times. He vocalized a need to forgive those one disagrees with because communities suffer without unity.

Vicky Rose, chairperson for the Libertarian Party of Mississippi, said her party does not agree with the mandates, so she came to represent the Libertarians at the discussion.

"The Libertarian Party believes that private businesses have the right to go ahead and ask their employees to do these types of things (mandating vaccinations), but public entities never have the right to require an employee to make a healthcare choice," Rose said.

Discourse arose as members of an emerging student organization, BARS (Beyond Arrest: Re-thinking Systemic-Oppressions at MSU), exited the meeting. Protestors shouted at the club members, asking why the students advocated for the mandate.

The Board of Aldermen meeting lasted over two hours, and as the sun set, the crowd began to dwindle. The final few protestors talked among themselves, no longer chanting or waving their signs. The people carrying American and "Don't Tread on Me" flags rolled them up and slowly exited the streets. Groups separated and waved goodbye to each other as they walked to their cars.

UPDATE: The Starkville Board of Alderman passed an updated COVID-19 vaccination policy for city employees late Tuesday night in a 5-2 decision.