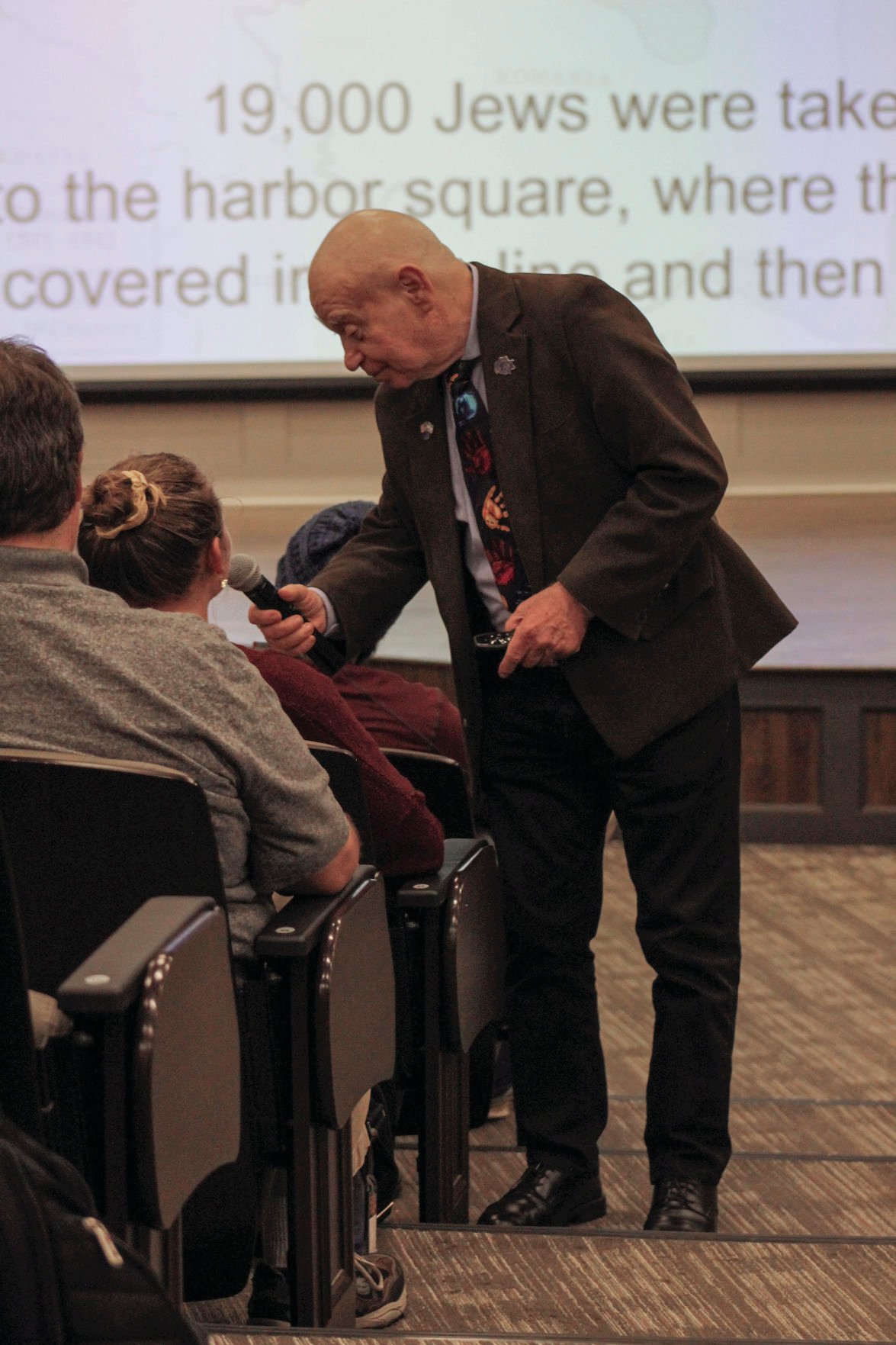 Sami Steigmann shared stories of his experience during the Holocaust with students Thursday. 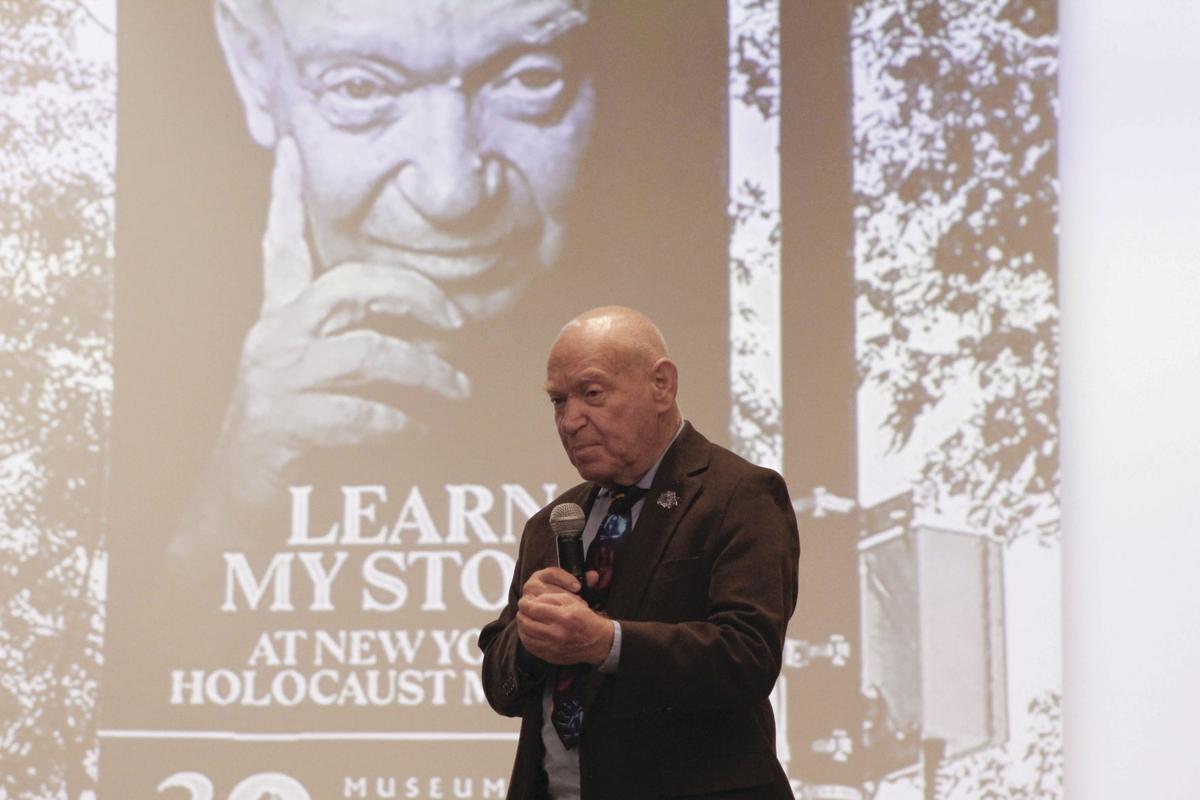 Sami Steigmann spoke to students and faculty on Thursday in Old Main about his life and what it means to be a Holocaust survivor.

Sami Steigmann shared stories of his experience during the Holocaust with students Thursday.

Sami Steigmann spoke to students and faculty on Thursday in Old Main about his life and what it means to be a Holocaust survivor.

Holocaust survivor Sami Steigmann spoke to Mississippi State University students about his childhood experience in the Holocaust Nov. 7 in the Old Main Academic Center. Organized by Hillel, MSU's Jewish Student Association, Stiegmann’s talk consisted of his experiences in a labor camp located in the Ukraine in the 1940s.

Steigmann was born in 1939 in Czernowitz, Bukovina and was deported shortly after to the Mogilev-Podolsky labor camp. As an infant, Steigmann was experimented on by the Nazis, where they performed cruel procedures on him for four years. He was eventually saved by a German woman living on a nearby farm. The woman saw signs of starvation in Steigmann and would give him leftover bread used to feed the camp guards.

This woman risked her and her family’s lives by feeding Steigmann as a young boy and he never even knew her name. However, Steigmann was happy to see a tree in remembrance of the nameless allies during the Holocaust at the Garden of the Righteous Among the Nations at Yad Vashem in Jerusalem.

Steigmann does not recall any of the experiments performed on him as a child, but the pain has stayed with him throughout his life. Because of this, he originally thought he did not belong as a true Holocaust survivor and kept his story bottled up for the following 63 years.

In 2003, he met with other Holocaust survivors at the United States Holocaust Museum in Washington D.C., where he met another survivor from Czernowitz who was also subjected to Nazi experimentation at a young age. Steigmann described this chance encounter as “bashert,” a Yiddish word meaning “meant to be." Talking with the man encouraged Steigmann to tell his story and since 2008, he has traveled all around the world sharing his story.

The first speech Steigmann gave in 2008 was to a group of sixth-graders that he admits was not his best lecture. However, he received a note from one of the students that read, “Your story is overwhelming and I promise I will pass this story on to my children,'' which has since motivated him to continue traveling the world and speaking to students, even at age 79. Students of all majors and ages came to see Stiegmann speak, including junior communications major, Kelsey Fulghum.

“In order to appreciate the present and times we enjoy, you must embrace the past that others have endured. I have always grown up learning about the Holocaust, but to see an actual survivor with my own two eyes was an honor. When Mr. Sami Steigmann said we would be the last generation to hear about the survivors’ experiences in person made me grateful to hear his story and share with my kids one day,” Fulghum said.

The lecture took place in a nearly full Wingo Auditorium in the Old Main Academic Center. Savannah Munn, a sophomore political science and public relations major and secretary of Hillel, said she was thrilled to have someone like Steigmann come and speak to students.

“It's important students can put a face and name to a tragedy like the Holocaust, otherwise it begins to fade into history and seem less vital to our life. Forgotten and glazed-over history has a tendency to repeat itself. There's a lot of hate in the world today, so it's important to remember what that fear and hatred can become if left unchecked,” Munn said.

This is Steigmann’s second visit to MSU, with the first taking place in 2016. Steigmann met the President of Hillel, Tyler Daniel, at a mutual friend’s wedding in Starkville. Earlier this year, Steigmann spoke with Daniel about coming back to Starkville and performing another lecture. Other than Daniel, organizing the visit was a combined effort between several organizations to get Steigmann back to Starkville.

“We’ve gotten a huge amount of help from Ra’Sheda Forbes, who is the assistant VP of Multicultural Affairs, and the Student Association has helped with funding. So, it’s really been a combined effort of several moving parts,” Daniel said.

Along with his lecture on the Nov. 7, Steigmann has spoken to students at Starkville High School and Armstrong Middle School, has given guest lectures in MSU classes and has met with university officials from MSU.

"Unlike like a lot of people who think this is a doomed generation, from my experience meeting so many young people, I believe in them and I believe that they will make a difference and a better world for themselves, their children and their grandchildren," Steigmann said.