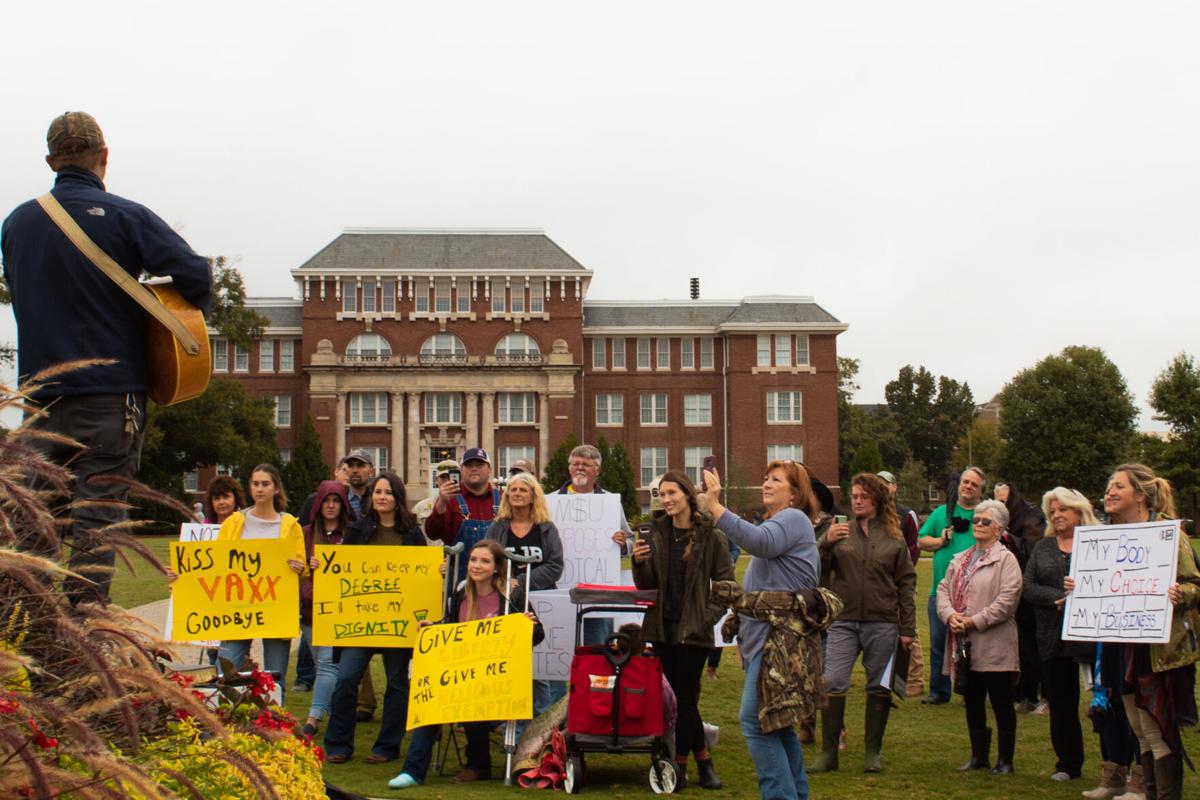 The medical freedom peaceful protest began with a prayer, speech and original song written by Mark Murphy, the protest’s organizer. 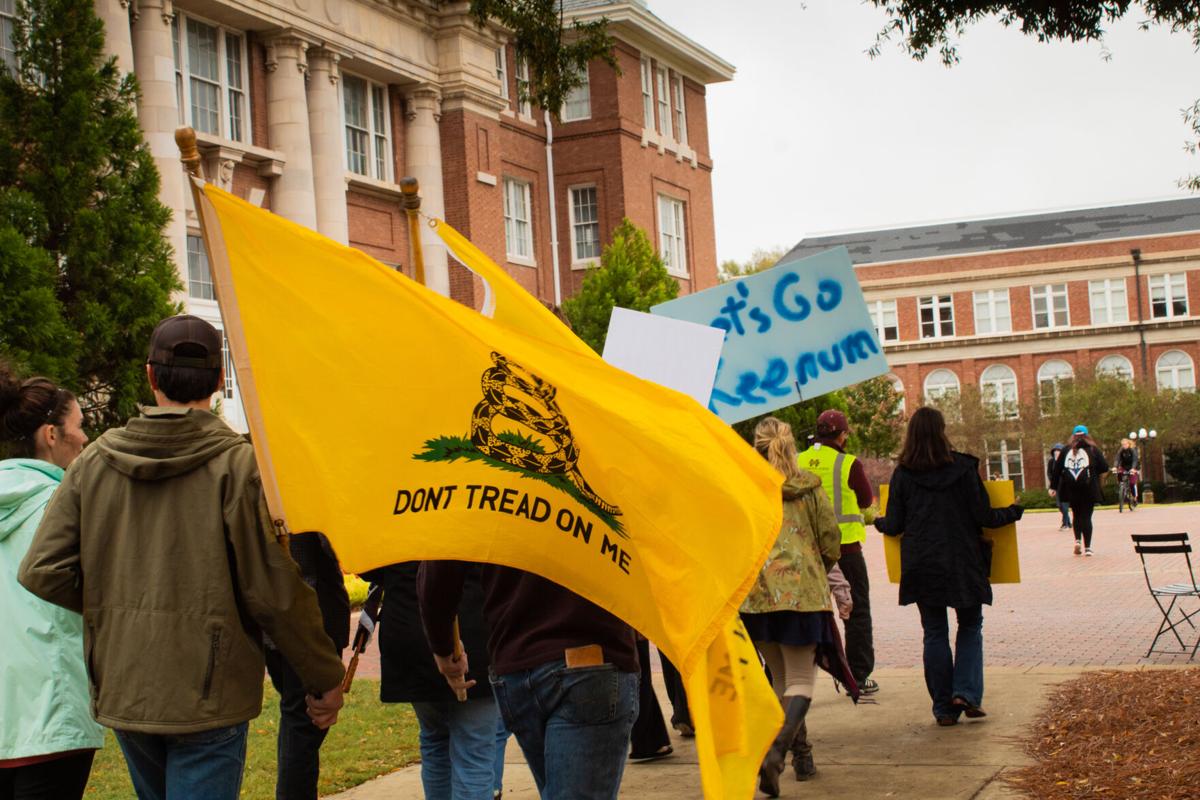 Several of the attendees brought signs and waved “Don’t Tread on Me” flags. 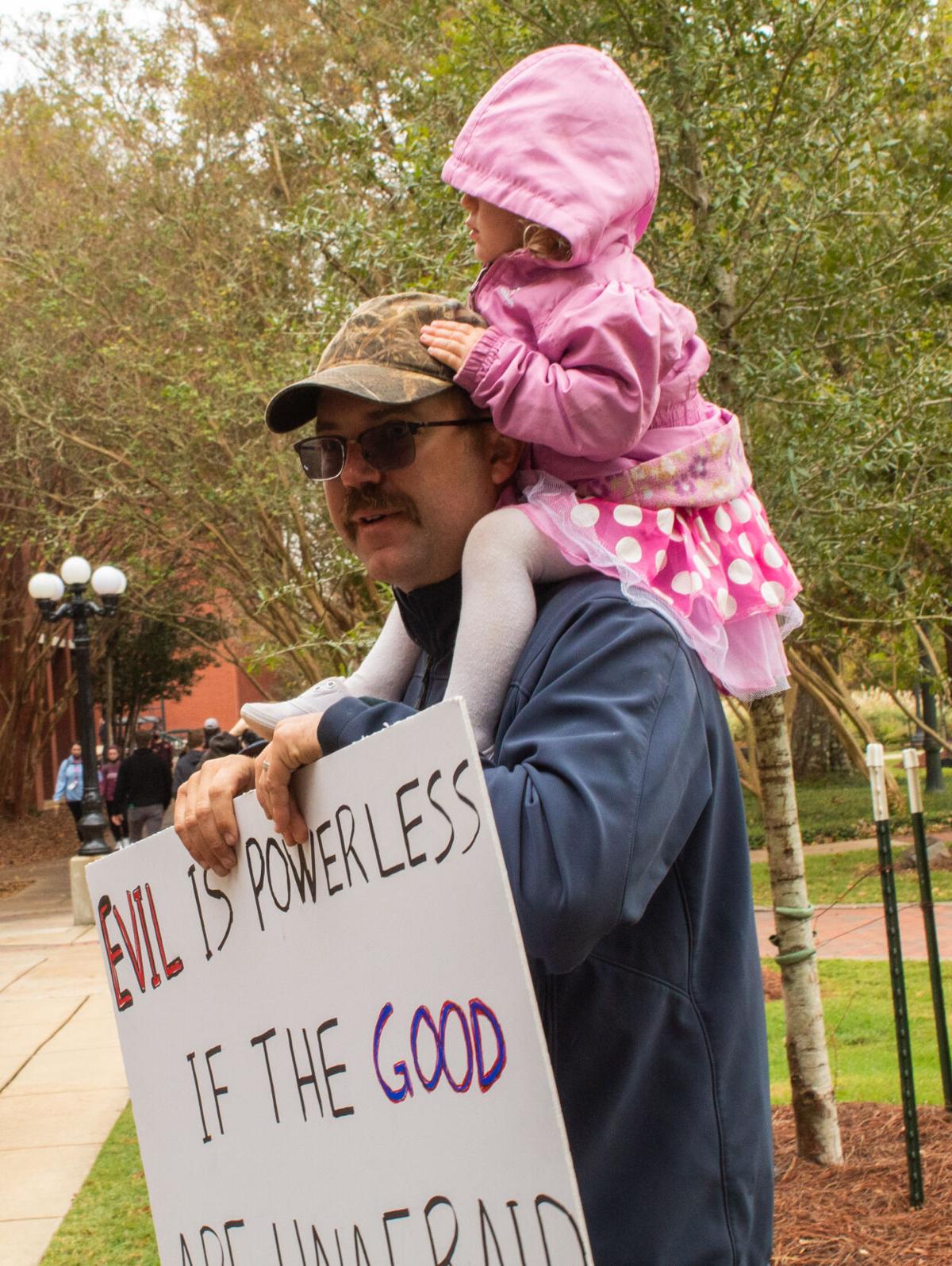 Mark Murphy, the medical freedom protest organizer, is pictured with a child on his shoulders. A couple of children attended the event along with adults.

The medical freedom peaceful protest began with a prayer, speech and original song written by Mark Murphy, the protest’s organizer.

Several of the attendees brought signs and waved “Don’t Tread on Me” flags.

Mark Murphy, the medical freedom protest organizer, is pictured with a child on his shoulders. A couple of children attended the event along with adults.

On a cold and gray Friday afternoon, a crowd of medical freedom protestors gathered by the flagpole on the Drill Field to voice their disapproval of Mississippi State University's recent federal mandate of the vaccine that was passed down to the university from the Mississippi Institutions of Higher Learning.

Mark Murphy, a research associate in the forestry department, organized the protest on a Facebook group called "MSU Against Mandates." Beginning the rally with a prayer, Murphy emphasized throughout his speech that he was against the mandate because of his religious freedoms and beliefs.

Murphy said he decided to organize the protest to "stand up against tyranny."

"When I got this email (from the university)," Murphy said to the crowd. "It put a fire in me to say, 'No, I'm not doing this,' and I'm glad that y'all are here with me to stand up for this."

Quoting multiple Bible verses and even amendments in the Constitution, the protestors heavily advocated for the attendees to file for religious exemption on MSU employees' online vaccine portal.

According to the Reflector reporter's eyewitness account, many of the protestors also attended Tuesday's protest. Some of the crowd members raised their voices and offered resources for other attendees to research religious medical exemptions.

"This is not the law … Do not let them bully you by telling you all the lies that they believe," a crowd member said with passion.

Next, Murphy sang an original song he wrote called "We Stand." The protest organizer said he wrote the song because he wanted to let the university administration know that a number of people do not agree with the vaccine mandate and will not back down on their disapproval of the IHL's decision.

As he sang, the crowd nodded their heads and watched in rapt attention.

After Murphy's performance, the crowd began to march in circles around the Drill Field. No chanting emerged from today's protest; the people mainly talked among themselves.

Some of the signs read "Ho Ho Ho, Vax or Go Go Go," "Let's Go Keenum" and "Freedom, not choice." A few protestors also waved "Don't Tread on Me" flags.

"I'm not with these guys," the spectator said.

He also explained that he believes the vaccine mandate is the best way for the university to combat the ongoing pandemic.

"I don't know—I'm just tired of these people all just, you know—the only way we're going to get this is through vaccines. It's just a shock, guys, like, come on," Thaggard said.

Last month, a large group of medical freedom protestors gathered at City Hall in response to the vaccine mandate for Starkville city employees that the Board of Alderman passed later that night. More protests on MSU's campus or in Starkville may emerge as the situation escalates. The "MSU Against Mandates" Facebook group is primarily where the protestors plan future events.