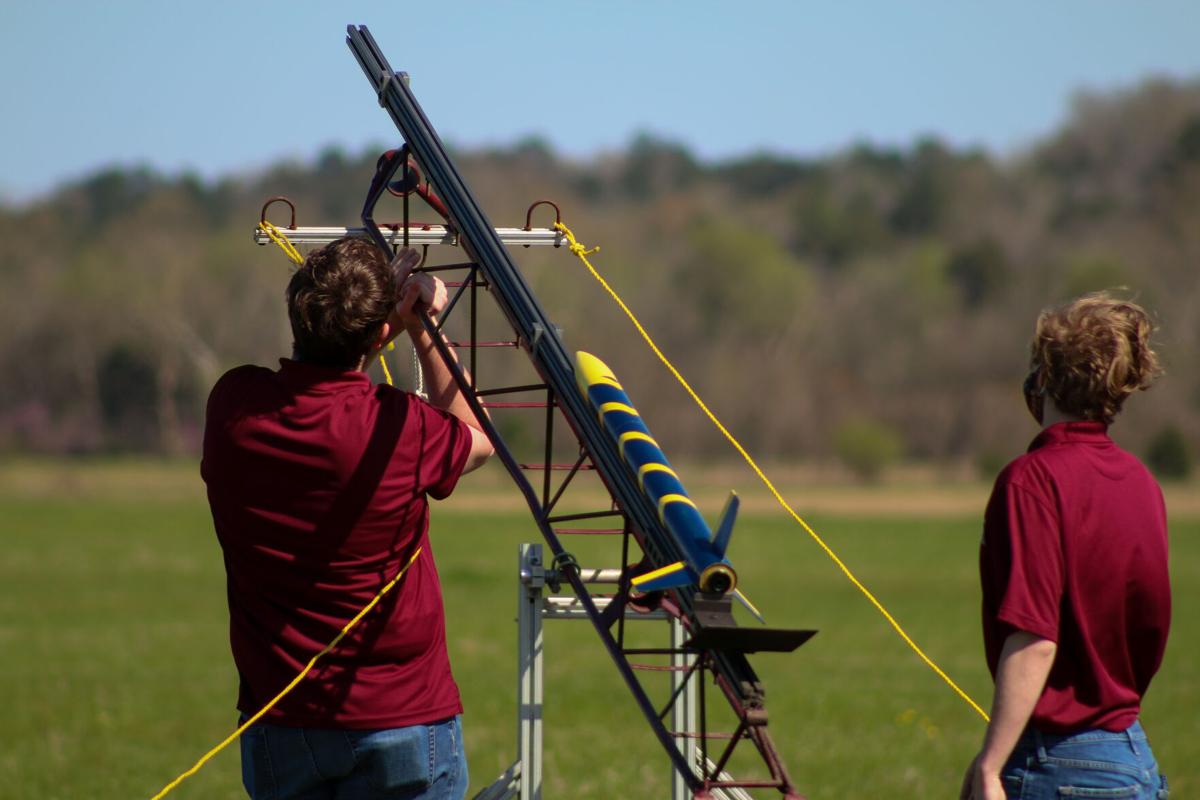 Jonathan Reeves and Oliver Coleman conduct last minute checks on their rocket before launching it. The Space Cowboys’ launch day was set up to certify new members of the club. 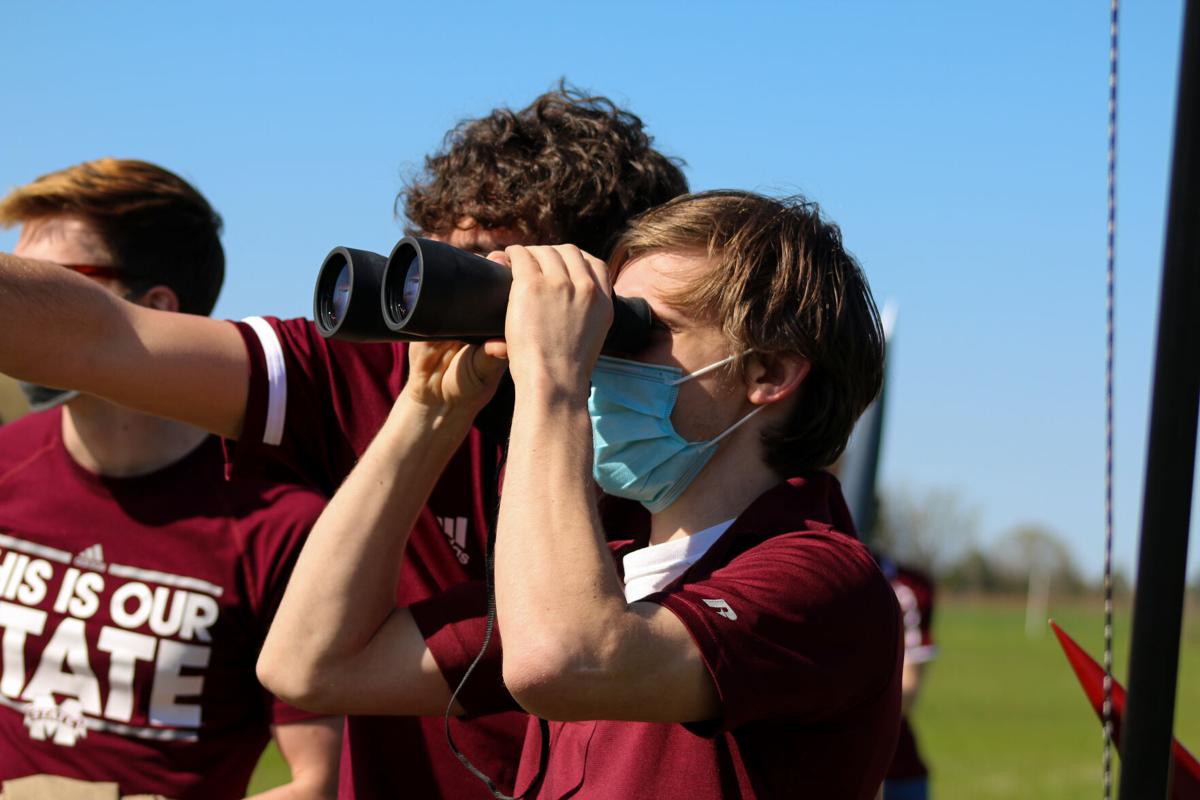 Victor Phelps, an MSU Space Cowboy participating in the launch day, uses binoculars to locate his rocket following the launch.

Jonathan Reeves and Oliver Coleman conduct last minute checks on their rocket before launching it. The Space Cowboys’ launch day was set up to certify new members of the club.

Victor Phelps, an MSU Space Cowboy participating in the launch day, uses binoculars to locate his rocket following the launch.

This past Saturday, the cloudless sky and peaceful pastures of Mississippi State University's dairy farm were occasionally disrupted by the roaring of rockets and the sight of propelled projectiles.

The Space Cowboys, MSU's resident rocket-building team, had been preparing for months for this day, when many of its members would finally become certified.

The launch day also included members of the University of Mississippi's aerospace team, the Ole Miss Rocket Rebels, who were certified earlier that morning.

Briana Taylor, the Space Cowboys' project manager and a senior in aerospace engineering, said the groups have not worked together in some time.

"This will be the first time the MSU Space Cowboys have collaborated with the Ole Miss Rocket Rebels in at least five years," Taylor said. "Unfortunately, the pandemic brought their team's operations to a halt last year, and they have since gotten back together."

The Rocket Rebels had earned a 100% success rate after launching and recovering nine rockets and certifying eight members, setting a standard the Space Cowboys could only hope to match.

"Certification launches help build a rocket team's technical skillset, which is something both of our teams are looking to do," Taylor said. "We were glad to have hosted them and to have been able to share this experience."

"We've had a pretty good morning," Hardin told the crowd. "We've got a lot of flights to get in the air."

After discussing the checklists and specifications every rocket would have to meet, Hardin asked for any questions. Seeing none, launch day began for the Space Cowboys.

"Alright, let's blow some holes in the sky," Hardin said.

Before their turn to launch, members up for certification began disassembling their rockets, checking parachutes and other items of importance.

Once everything appeared in order, the rocket would be examined by Hardin and his team before being loaded into the rail, a device which guides the rocket upward.

The Space Cowboy would then announce his or her name, the model of the rocket and how high it was supposed to reach, and the countdown would begin.

After a simple press of a button, the rocket would ignite, and it would disappear amidst the sky, leaving only a trail of smoke.

Once the parachute deployed, the Space Cowboys would point at the rocket, per tradition.

More often than not, the rocket would be caught in the wind and carried over to other fields in the dairy unit. One was even caught in a tree, 50 feet up.

"You better start walking," someone would shout at the member, and off they went with a radar gun in hand. Most of the rockets had been fitted with trackers before launch, which would lead their builders straight to the distant landing sites.

Every rocket had been built from a kit by a team of Space Cowboys, typically a mentor of sophomore or junior level and their mentees. The Space Cowboys mentorship program is new to the group this year.

Emily Erwin, a senior aerospace engineering major and Taylor's mentee, said the mentor orders the rocket kit and shows the younger members how to assemble it.

"The goal of the mentorship program is to get the sophomore or junior to Level 1 certification, and the mentees learn how to put a rocket together," Erwin said.

Certification for rocket design teams has three levels set by the National Association of Rocketry (NAR). Most of the Space Cowboys launching on Saturday were aiming for Level 1 certification.

To earn a Level 1 certification, the Space Cowboys had to simulate, analyze and build their own high-powered rockets under the team's supervision.

Each member was responsible for ensuring their high-powered rocket operated safely during its flight and did not exceed altitude and perimeter limitations. They were also required to recover and return the rocket to Hardin for a post-flight inspection.

After earning their Level 1 certification, some members had prepared a second rocket to try for Level 2.

For the Space Cowboys, launch day lasted until later that night, wrapping up around 6 p.m. Their success rate is still to be determined until some members can recover their rockets from trees.

The group plans to return to the dairy farm at a later date to finish certifications and begin certifying Level 2 members.