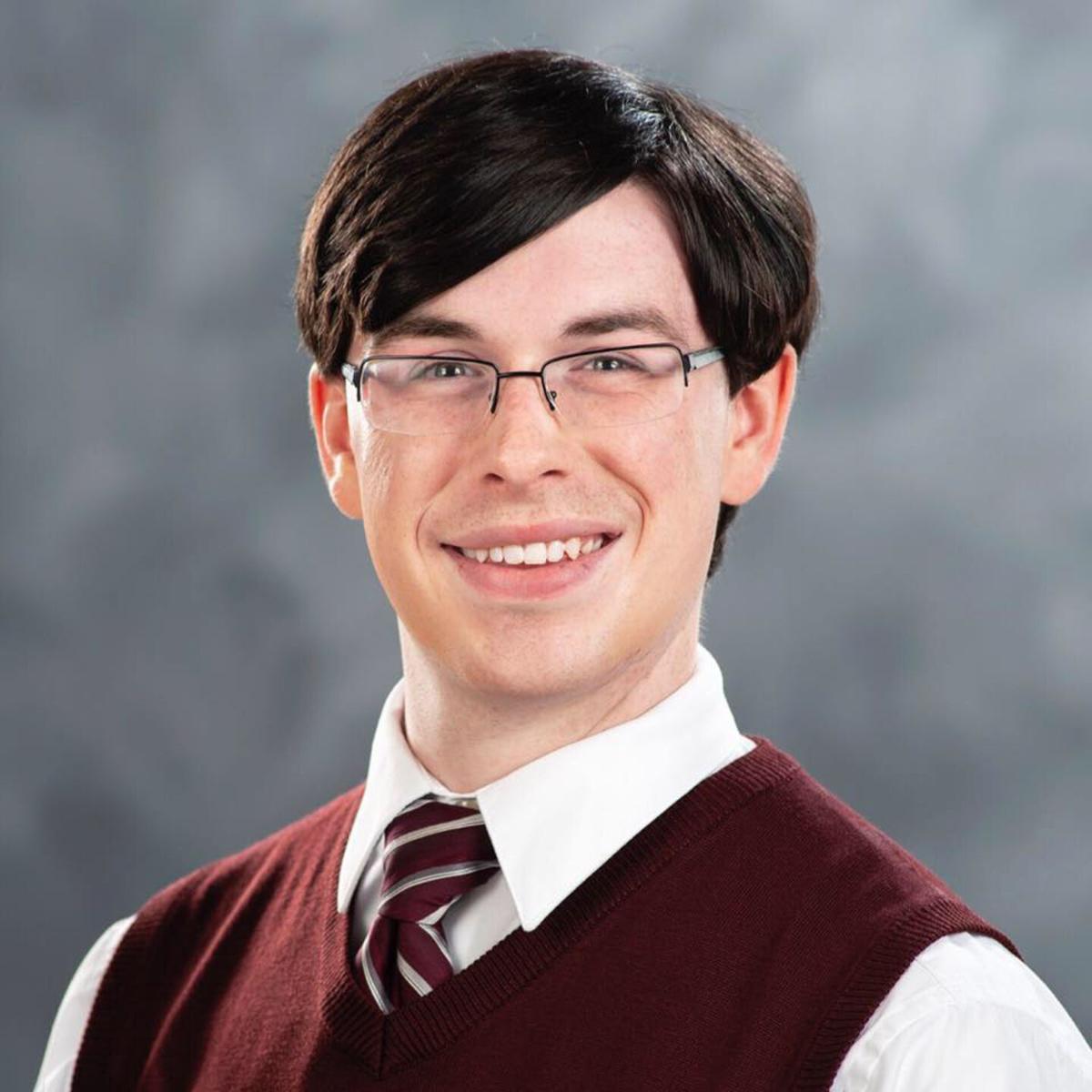 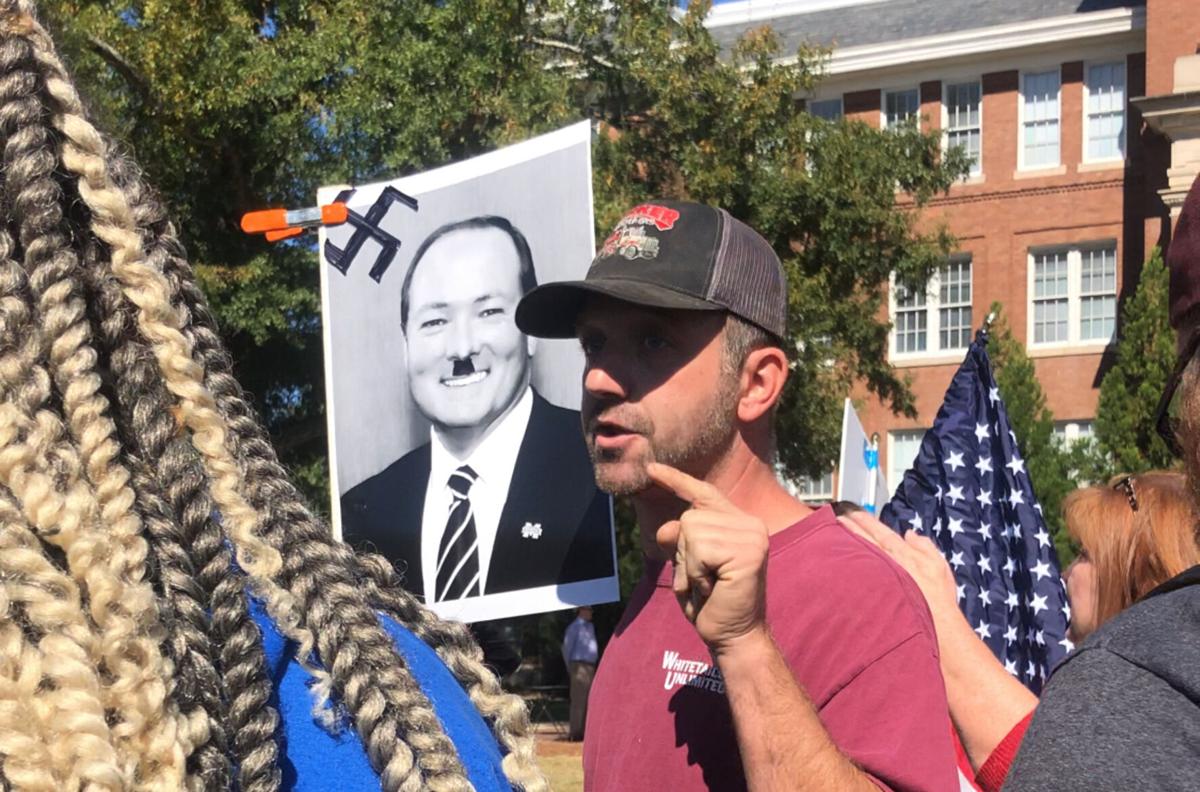 Caleb Murphy, a protestor, holds up a sign depicting President Keenum as Hitler.

Caleb Murphy, a protestor, holds up a sign depicting President Keenum as Hitler.

On Oct. 26, a handful of Mississippi State University's faculty and staff, as well as a few unaffiliated individuals, gathered together to protest against the vaccine mandate placed upon employees the day before.

Within this protest on the Drill Field, signs were included that associated MSU President Mark Keenum with Hitler and the Nazi agenda. Other signage located in the Thad Cochran Research Park proclaimed, "Hail State" with a swastika replacing the "S."

The presence of these specific signs around campus raised concern among MSU's population and caused the Jewish Student Association, Hillel, to voice their disapproval of such conduct. Hillel at MSU is an organization dedicated to providing Jewish students with a place of community and representation.

Tyler Daniel, Hillel president and a Ph.D. student studying political science, spoke of his own worries raised by the Nazi imagery and how using these symbols is antisemitic.

"When someone decides to use Nazi symbolism and messaging, they are opening themselves up to that confusion. That confusion was the motivating factor behind our exploration into why the signs were posted in the first place," Daniel said.

After Hillel released a letter of condemnation against this behavior, Daniel explained that many protesters reached out to apologize.

"They apologized for the fear they thrust onto many of the Jewish students by including those symbols. They explained that they were not attempting to be antisemitic," Daniel said.

Daniel noted that many of the protesters he spoke to felt the vaccine mandate was akin to Nazism; however, he thoroughly explained to them that it was inappropriate to use such imagery in this context.

Daniel stated that the response of the collegiate community made him feel as though Hillel is very welcome on campus.

"We heard support and received messages from everyone. This includes President Mark Keenum, the vice president for diversity and inclusion, the director of the Holmes Cultural Diversity Center, campus police and anyone who could lend their support. It even extended beyond the administration as we received an outpouring of support from students and student organizations," Daniel said.

Daniel discussed the idea of the university moving forward by identifying those involved and following through with informative workshops regarding ethnic sensitivity.

Andrew Elberson, president of the International Student Advisory Board, relayed his disappointment in the appearance of these references.

"When I saw the signs, I was honestly disappointed because I know that Mississippi State can do so much better," said Elberson, an international business major.

Elberson felt that the protest became trivial when Nazi symbolism became involved. However, he felt like the protestors resorted to the usage due to a lack of understanding.

"I think a lot of it has to do with education. It involves being educated in how Nazi Germany has used the symbol and how propaganda was used," Elberson said.

Elberson said his organization, ISAB, hosts an event called Coffee, Culture and Conversation every month to discuss current events and different opinions regarding the international community.

"This is a great way to get different perspectives on topics. This is one of those topics that could be discussed. Just getting students together from different backgrounds and talking about the issues," Elberson said.

Morgan White, a member of Hillel and a senior majoring in biological sciences, said these actions were not permissible, but she never assumed antisemitic sentiment behind the signs.

"I didn't think it was scary because I knew they were not doing it to be antisemitic. In 2021, you just wouldn't think that you'd walk to class and see Hitler associations and Nazi symbols. It's just strange to know that people still think that it's okay to hold that up— no matter what they were trying to do with it," White said.

White felt as though the involvement of MSU faculty is what truly left her shocked.

"I was just upset to see that there were professors like standing with those people," White explained.

White finished by acknowledging that the individuals had the right to protest their own cause but should refrain from involving unrelated events of tragedy.

"Obviously, people have freedom of speech, but that gets cut off when it resembles hate speech," White said.

Amazing information providing by your article, thank you so much for taking the time to share a wonderful article.