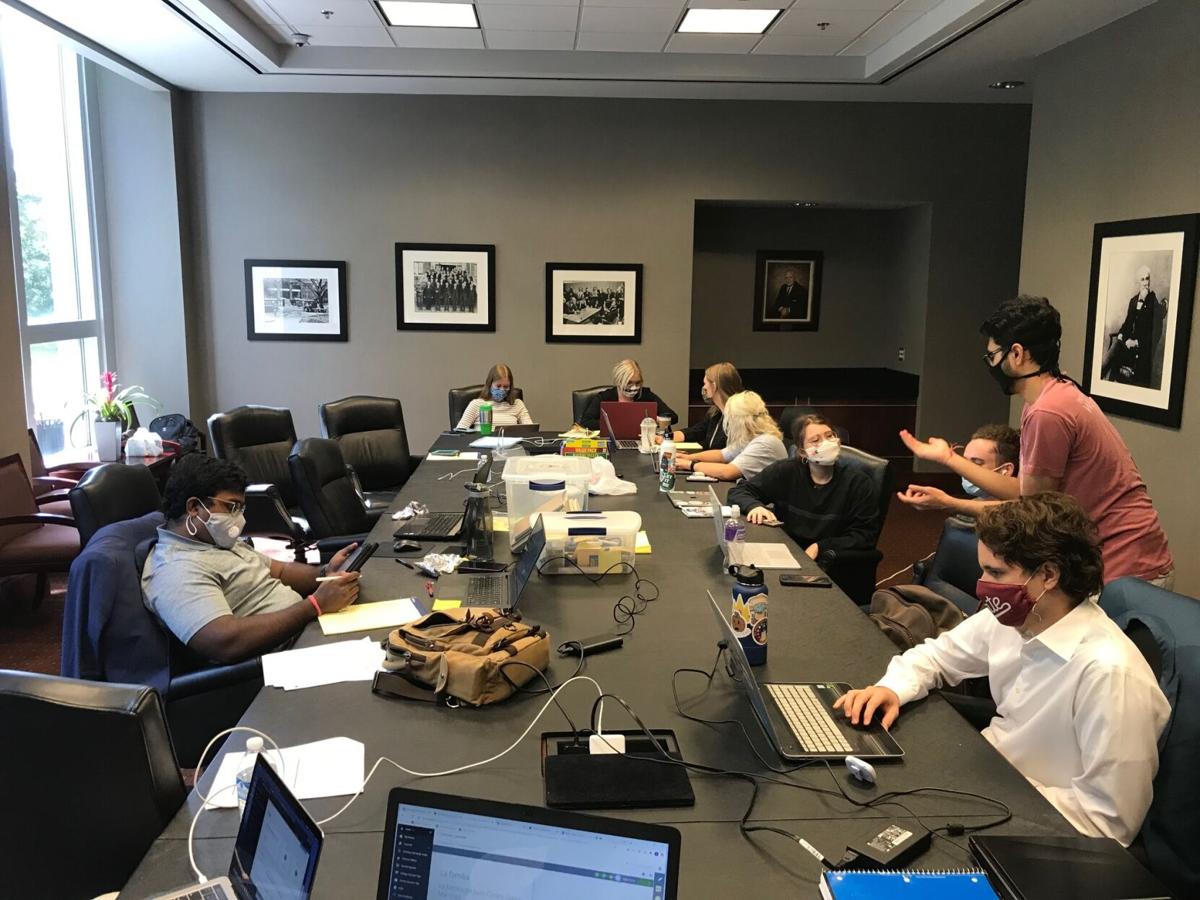 The MSU Speech and Debate team discuss debate topics in the prep room before members leave for separate rooms to compete. 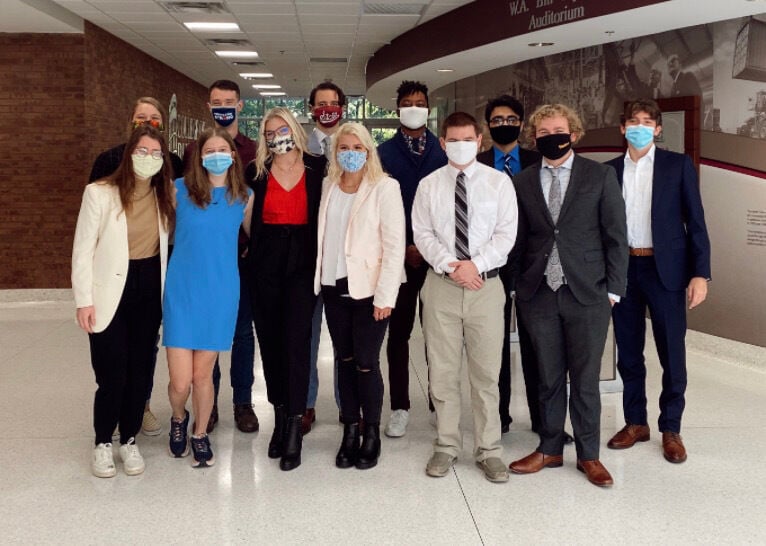 The MSU Speech and Debate team pose for a team photo. This year, the team has excelled, placing well in many tournaments.

The MSU Speech and Debate team discuss debate topics in the prep room before members leave for separate rooms to compete.

The MSU Speech and Debate team pose for a team photo. This year, the team has excelled, placing well in many tournaments.

Mississippi State University's Speech and Debate Council was recently awarded the 1st Overall Sweeps Award at the Southern Forensics Championship Tournament, the first regional championship win for the team. Starting on Jan. 29, the 14 MSU students participated in debate and individual speech competitions, earning more than 30 awards and placing high enough to win the overall award for the competition.

MSU's Speech and Debate team was founded by Cheryl Chambers and Brett Harvey five years ago. According to Harvey, Title IX director for the university and the coach of the debate team, the Southern Forensics Championship Tournament is an annual event, usually held in person, for schools in the Mississippi, Arkansas and Louisiana tournament, but schools from outside that area usually participate as well. MSU competed against more than two dozen schools in a variety of individual and team competitions, ranging from individual debate to prepared speeches.

For example, Nirmal Bhatt, vice president for debate and senior mechanical engineering major, participated in the debate side of the competition, where a set number of preliminary rounds are held going into a single elimination style playoff. Bhatt said the topics for debate can be anything, with gaming consoles and corporal punishment being some of his topics from this competition.

The success found at this tournament is one of many in the past year, with the Speech and Debate Council performing well in many of their previous tournaments last semester. Harvey credits the excellent performances this year to staying prepared and focused despite the changes brought on by the COVID-19 pandemic.

"Even though we are debating virtually, we try to do everything we can to keep the experience as close to a real debate as possible. Rather than have students debate from their dorm rooms or home, we actually get together in a single prep room like we would in a normal tournament," Harvey said. "They have me there as a coach, their teammates there. I think that helps them feel a little bit more formal, more prepared. I think that has helped us do better this year; we have had a really good year overall."

According to Bhatt, the diversity of the team, both in knowledge as well as personal background, is a meshing factor for the team and allows the members to fill in gaps for topics or give advice and new perspectives. The weekly practice schedule is also a massive factor in the team's success, wherein the team members debate each other, practice speaking and critical thinking skills and give each other feedback to grow going forward.

"We have great coaches for our team. They go above and beyond and put forward so much of their time and energy into making this team great. All of our officers step up in really big way to make sure that the team gets the practice that they needed, the coaching that they need to improve their work. And we all mesh well together; everybody gets along," Melvin said. "If you have a solid team behind you and you all get along, you all put forward your best performance, you are going to do well."

Mia Robertson, vice president of speech and a junior political science major, said the next step is to win a national championship. Based on the great season they have had so far, she believes they can.

"We are trying to win the national championship, of course. We just won regionals, and we are on a really great trajectory to do that," Robertson said. "Every tournament except one this year we walked away with first place. We are really hoping that we can take that next step and win our first ever overall national championship."

From here, the team plans to keep practicing and perfecting their craft, with hopes of performing well in three more regular season tournaments before participating in the overall national tournament.

New members are always welcome, according to Robertson, and are provided with a great opportunity to develop their personal skills.

"I would like to say that for anyone who is interested in developing your critical thinking skills, being better at thinking on your feet or even just better at public speaking and communication, there is a place on the speech and debate team for you," Robertson said. "It doesn't matter what your major is or if you've never done speech and debate before. There is a place for everyone, and we want to welcome more people."