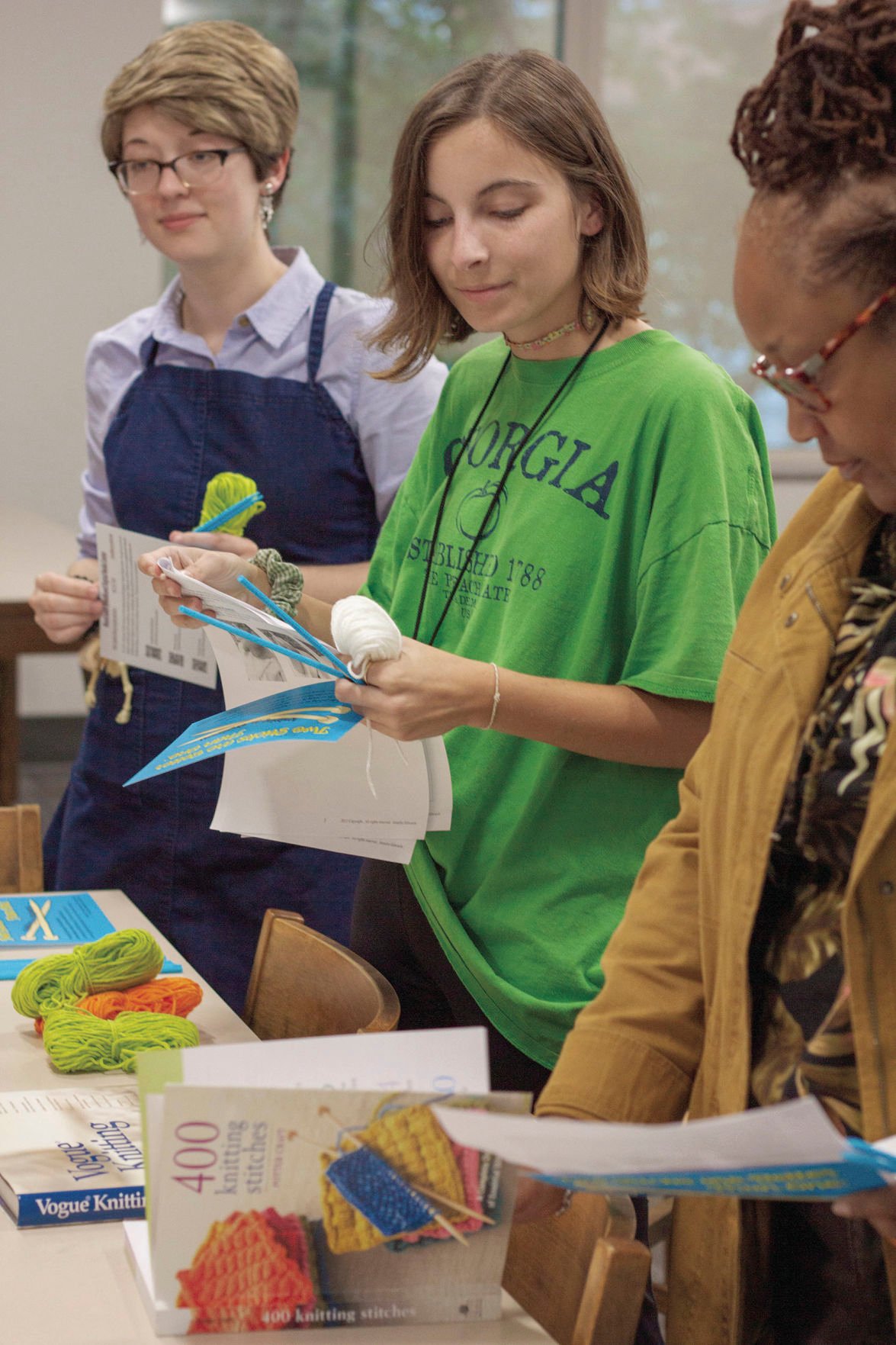 In addition to the knitting workshop, the Mitchell Memorial Library also plans to host a crocheting and t-shirt workshop in the makerspace. 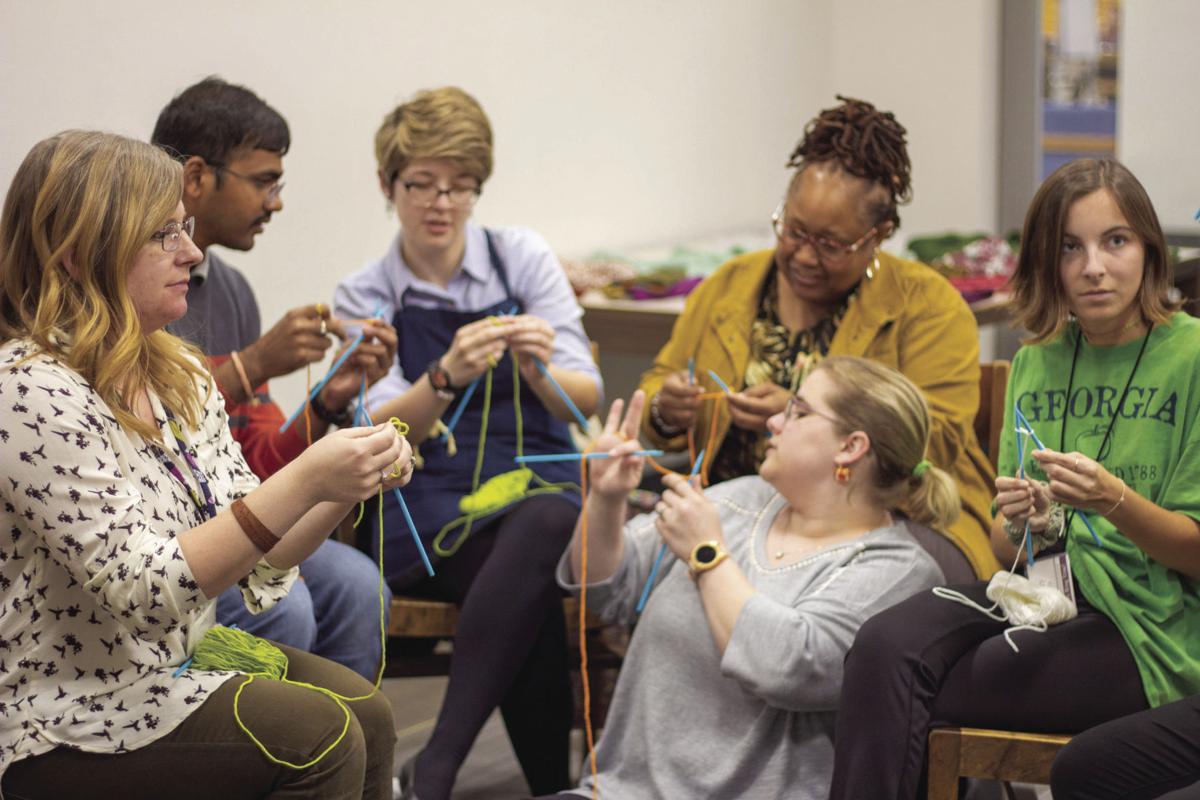 In addition to the knitting workshop, the Mitchell Memorial Library also plans to host a crocheting and t-shirt workshop in the makerspace.

Mississippi State University’s Mitchell Memorial Library hosts technical skills workshops throughout the year inside the Digital Media Center’s makerspace, one of which is a knitting workshop.

The last workshop was taught by Teri Robinson, an assistant professor in the Office of Thesis and Dissertation Formatting, and Caree Sisson, Technology Specialist for the Digital Media Center. Attendees were instructed in basic knitting skills, such as how to make a garter stitch, and practiced using skeins of yarn and 3D-printed knitting needles. Attendees got to take home their yarn and needles at the end of the workshop.

Sisson acknowledged the 3D-printed practice needles were not high quality, but she added that their lower cost, compared to metal needles, is beneficial for the library and the students.

“It allows people to have something to take home and practice with. We want to provide patrons with materials instead of having to keep them here,” Sisson said.

Robinson, who has been knitting for over 10 years, said she hoped those who attended the workshop gained an appreciation for the art.

“Knitting is considered an old lady hobby, but there’s a lot more to it than most people expect," Robinson said.

This is the first workshop Robinson has taught on knitting, but she said she would teach more if asked.

“If you can learn some of the basic techniques, then it opens up a whole new world of creativity for you,” Robinson said.

Sisson said she has been crocheting for almost 10 years, but she has only been knitting for three weeks.

“It’s really difficult, so I might not keep it up. I have a lot of crochet projects I would like to do,” Sisson said.

Sisson has also taught a crocheting workshop for the Digital Media Center. These workshops are part of a larger effort by Sisson to promote the Maker’s Space.

“We’ve had a crochet workshop, a knitting workshop, a decal workshop and we’re having a Christmas t-shirt workshop in December,” Sisson said. “We want to give students access to things they might not otherwise have access to.”

Sisson hopes to expand the workshops further by collaborating with student groups and offering tutorials on more advanced techniques.

“I spoke with the fiber arts club about possibly working together,” Sisson said. “We hope having more teachers will allow us to offer more workshops at more levels beyond beginner.”

“It’s helpful to have other people as resources,” Sisson said. “If someone knows how to do a stitch I don’t, I can just ask.”

Sisson also said students can set up individual appointments if they would like to continue developing skills from a workshop or if they missed a workshop but still want to learn.

Laura Terry, workshop attendee and staff member within the forestry department, has been knitting for seven years but found the workshop to be a helpful confirmation of her knowledge.

“I’m mostly self-taught and don’t practice much, so I wanted to make sure I hadn’t made something up about how to knit,” Terry said.

Terry described the workshop as an affirming experience.

“I was struggling, but I could see other people struggling too,” Terry said. “It helped me remind myself that it’s okay to not totally get it.”

Terry said attending the workshop has inspired her to continue with knitting as well as start new projects.

“I’m making a scarf for my girlfriend which I hope to have done by December,” Terry said. “I’m thinking about setting up a one-on-one appointment to find some direction on starting other projects.”

Terry said she hoped to go to future workshops.

“I think it was a great experience,” Terry said. “I’ve even had coworkers ask about it to see if they’d like to do it, too.”