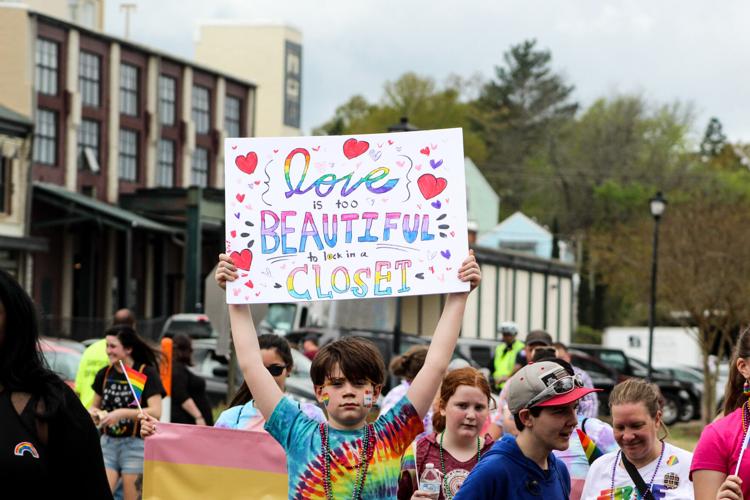 Citizens of all ages walk while carrying supportive signs at the 2019 Starkville Pride parade. This sign reads, “Love is too beautiful to lock in a closet.” 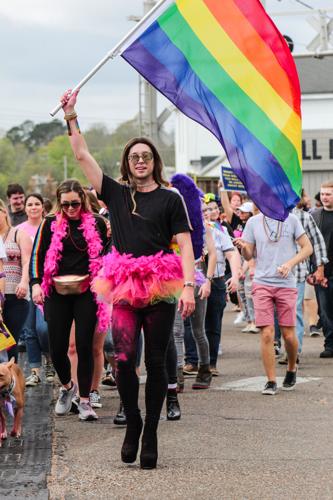 Starkville Pride attendees wave flags while marching through the city in 2019.

Citizens of all ages walk while carrying supportive signs at the 2019 Starkville Pride parade. This sign reads, “Love is too beautiful to lock in a closet.”

Starkville Pride attendees wave flags while marching through the city in 2019.

On April 22, Starkville Pride will return after a two-year absence. Once again, the streets of downtown Starkville will see vibrant rainbows and flourishing flags.

In 2020, Starkville Pride was canceled a week prior to the event due to the COVID-19 pandemic.

The festivities will begin at 6 p.m. on Friday, April 22, with a Pride Kickoff at Harvey's. This mixer will allow the Starkville community to meet the Starkville Pride board and other members of the LGBTQ+ community.

A Queer Arts Market will be held at 12 p.m. on Saturday, April 23, at Fire Station Park and followed by the Pride Parade at 1 p.m.

Afterward, there will be a happy hour at Georgia Blue beginning at 3 p.m. and a Pride Night Drag Show at Rick's Cafe at 8 p.m. Tickets for the Drag Show are $20 with a student discount of $15.

Finally, at 11 a.m. on Sunday, April 24th, there will be a Drag Brunch at Dave's Dark Horse Tavern.

The idea soon turned into a larger group effort by LGBTQ+ student organizations who wished to make the event a reality.

The group presented the idea before officials at Starkville City Hall, but it was denied the necessary permits with a final 4-3 vote from the Board of Aldermen.

News outlets like NBC News and The New York Times brought national attention to the city of Starkville and its decision.

Due to the controversy surrounding the ruling, the permit was later approved.

The initial decision led to an increased focus on the event and resulted in the biggest parade the city of Starkville has ever hosted on record. The first Starkville Pride witnessed more than 3,000 attendees.

The presence of the LGBTQ+ community on MSU's campus began in the early 2010s with a student organization called Spectrum which focused on bringing the LGBTQ+ students together.

However, a split divided the community.

Spectrum was focused on community building and privacy while some members wanted to do more for the LGBTQ+ community in Starkville on a public level.

Those students broke off and formed the LGBTQ+ Union.

The two groups coexisted until spring 2019 when they recombined to form F.L.A.R.E. (Fostering LGBTQ+ Advocacy, Resources and Environments). It is now the primary LGBTQ+ student organization present at MSU.

The group alternates between private and public meetings and works to extend education on the LGBTQ+ community to the rest of the university.

Harry Jones, a senior biochemistry major and the president of F.L.A.R.E., said it is important to build a community to find others to be vulnerable with.

"We're not building an army," Jones said jokingly. "I'm happy that we continue to foster a small community and occasionally reach out to the public."

Meagan O'Nan is a Starkville native, award-winning author, keynote speaker, storyteller and MSU alumna who has published books about her firsthand experience as a queer woman.

O'Nan was outed while attending MSU in 2004. After her experience, she decided to leave the state for several years and eventually returned in 2010.

MSU celebrated its first National Coming Out Day in 2013, at which O'Nan was a speaker.

In O'Nan's eyes, the event marked the start of conversations about same-sex marriage and gay rights.

O'Nan was also involved in the first Starkville Pride.

O'Nan said the event and the supportive community are essential.

"Coming back together, we all have to do our little part and be open to other people outside of our community as well," O'Nan said.

Since the first Starkville Pride, there has been no further controversy when acquiring the permits to hold the event.

"Not only does it benefit the LGBTQ+ community in town, but it draws students to MSU. It is important for the people living in our area to see that," Smith said.

Smith explained the significance of Pride.

"If young gay, lesbian, trans kids see adults that are successful, that are living and working and thriving, that phrase, 'It gets better' is more than just a Band-Aid," Smith said. "It's more than just an, 'Oh, it'll eventually be okay,' because you see it, and I think that's what Starkville Pride does."

Patty Lathan, the vice president and treasurer of Starkville Pride, described the importance of LGBTQ+ events were to her.

"It's really important that we have something like Pride so that our youth can realize that there are other LGBTQ+ people around and that we have our straight allies who are there to support us as well and not feel so alone," Lathan said.

O'Nan concluded with her own parting advice to the LGBTQ+ community.

"To the LGBTQ+ community, just keep showing up. We need each other. That is how we make change," O'Nan said. "That is how we get more acceptance."