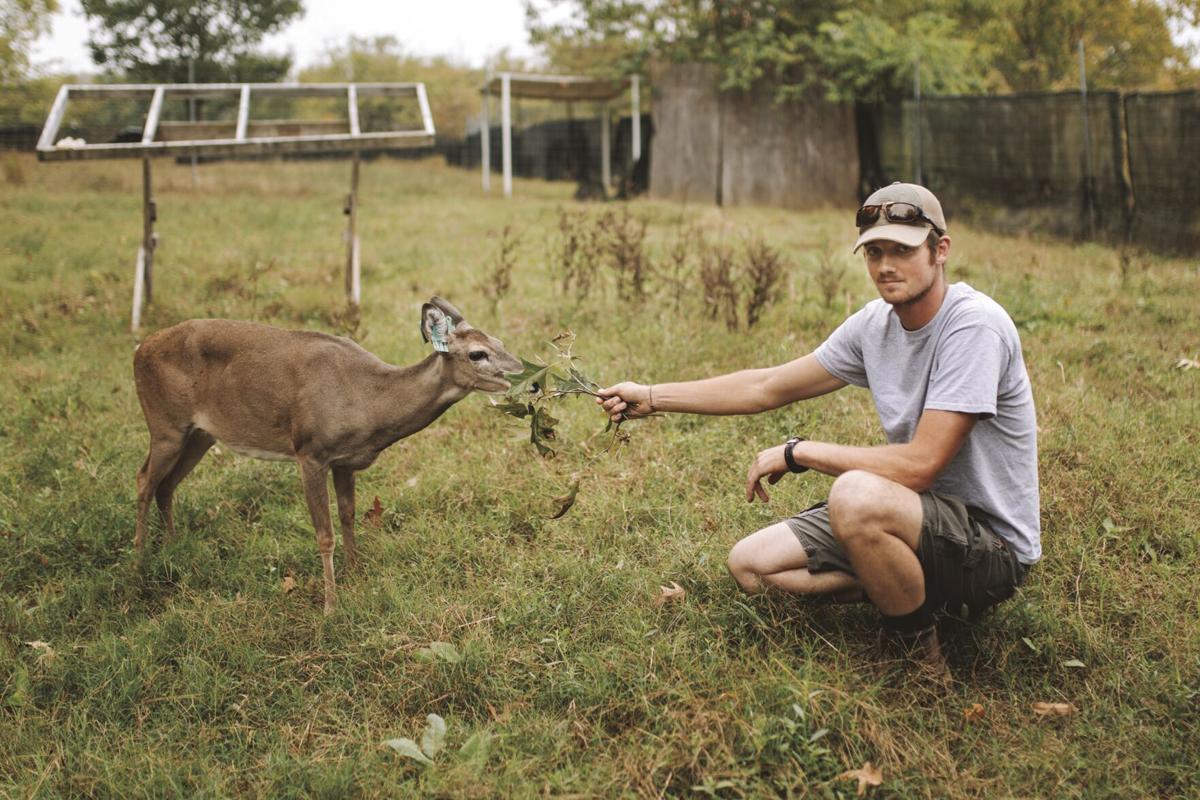 Graduate student Luke Resop feeds Belle. Resop came to MSU to study whitetail deer since the lab is nationally known for their work. 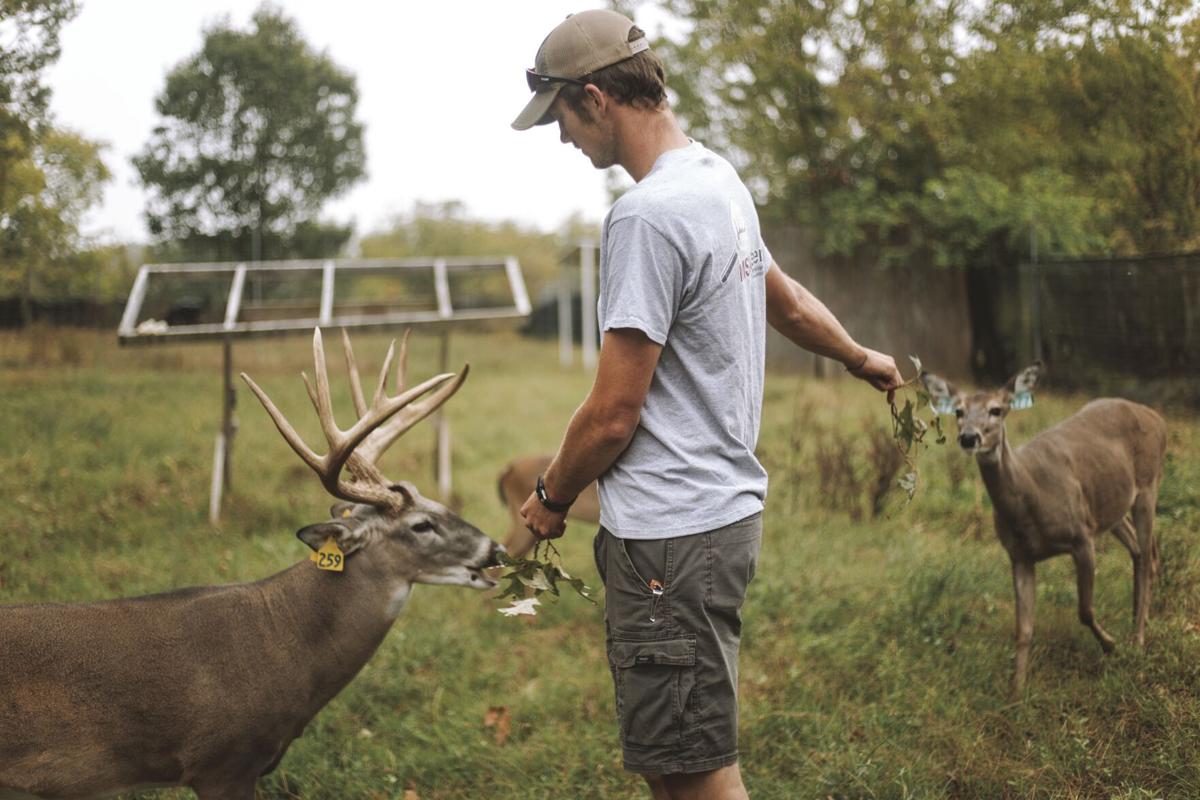 Luke Resop feeds oak leaves to Lucky, Belle and their fawn Scout. These deer are captive-raised and studied at the deer lab facility near campus.

Graduate student Luke Resop feeds Belle. Resop came to MSU to study whitetail deer since the lab is nationally known for their work.

Luke Resop feeds oak leaves to Lucky, Belle and their fawn Scout. These deer are captive-raised and studied at the deer lab facility near campus.

"We have three deer in that pen. Lucky is our tamest buck. I could probably get him to come to the fence if I gave him some oak leaves or something. He's a sucker for oak leaves," Mississippi State University graduate student Luke Resop said as he pointed over to a grassy enclosure.

A set of antlers soon appeared over the brush. A large whitetail deer stood up and made his way toward the gate of the enclosure as Resop entered with a branch of leaves. Lucky is one of nine deer found less than a mile from campus as part of the Deer Ecology & Management Lab at MSU, a testament to the university's longtime dedication to one of Mississippi's most recognizable species.

This work lives on today in a permanent facility near campus, led by Bronson Strickland and Steve Demarais. Since their takeover of the lab, their research has been published and implemented for various issues, leading to the improvement of factors such as nutritional quality, habitat management and better understanding of behavioral patterns as well as changes in state legislation regarding deer management practices.

Their commitment to deer populations is moving centerstage as the prevalence of Chronic Wasting Disease (CWD) increases in the Southeast. According to Steve Demarais, Taylor Chair in Applied Big Game Research & Instruction and one of the co-directors of the lab, CWD is a slow-spreading neurodegenerative disease caused by a type of protein called a prion. The disease works similarly to Alzheimer's and dementia in humans as it slowly degrades a deer's brain and bodily functions.

The disease initially spread through populations in western states like Colorado, but in recent years, infections have been found throughout the eastern seaboard due to human movements of animals.

CWD is not easily detectable as chronic symptoms appear many months after infection, making spread of the disease hard to detect, but once the infection takes root, the effects are detrimental to deer populations. Because of this, Demarais insists the best offense is a good defense.

"It is an educational battle getting people to understand the true process of Chronic Wasting Disease. It is happening, and people need to learn how to manage properly," Demarais said. "The science for CWD indicates that we need to have animals tested so that we can improve our information and manage it more effectively where it is to limit the spread of the disease through the state."

The state and university took this preemptive approach starting in the early 2000s according to Wes Burger, interim dean for the College of Forest Resources. In preparation for the disease, the Mississippi Department of Wildlife, Fisheries and Parks (MDWFP) developed a plan and conducted low-intensity sampling until a case was eventually found within the last three years. Since then, MDWFP, MSU and the MSU College of Veterinary Medicine Research and Diagnostics Lab have implemented an intensive sampling program.

According to the annual CWD report published by MDWFP, low-intensity sampling began in 2003 and continued through 2015 with a total of around 10,000 sampled deer over the timespan. After the first positive case was reported in Arkansas, sampling was switched to an intensive program, with nearly 20,000 sampled deer in the period of 2016 through 2019. Since the first positive in the state, the sampling program reports a total of 54 CWD positive deer, a number that is slowly increasing.

The jury is still out on possible transmission of the CWD prion to humans, but caution is encouraged. Burger mentioned the fact a vast majority of the infectious diseases humans deal with stem from animal populations and believes it prudent to take the threat seriously.

The deer lab believes it is crucial for hunters and land managers to have access to scientifically sound information that can influence their decisions, both for CWD and general management purposes. Luke Resop believes this bridging of science and hunting is at the heart of what the lab does.

"At the deer lab, we want to merge science and hunting culture. We take science and try to make it presentable and digestible for hunters. There are just so many opinions on Chronic Wasting Disease that are just the farthest thing from reality," Resop said. "We want people to know what is happening, what we are doing and why it is important. That communication is super critical."

According to Demarais, the lab's traditional outreach programs include speaking to hunters and landowners directly or meeting with large timber companies and corporate landowners. In recent years, however, there has been success with social media platforms as well as YouTube and podcasts for the delivery of information.

Burger knows the importance of deer, both as an economic and cultural asset for the state and believes hunters to be critical in the conservation of wild populations. His hopes going forward for deer populations and deer hunting rely on MSU's deer lab, as both groups face an uncertain future.

Hunter populations are being hurt by this development as well. Burger noted the national hunter population is declining, which he attributes to a lack of exposure for children.

"People are less connected to the land, and a greater percent of the population may not have access and may not ever have been exposed. Kids don't grow up to be sportsmen," Burger said. "I am a sportsmen because my grandfather was an avid bird hunter and took me hunting when I was nine years old. That was something I was introduced to as a young child, and it became part of the fabric of who I am. Many kids today don't have that and are disconnected. We call that nature deficit disorder; they don't have as much opportunity to just explore natural environments."

Regardless of the many challenges facing deer populations and hunters, Burger is proud of MSU for working to solve issues and educate Mississippi hunters and land managers.

"Deer are an important species in the state, and we are proud and also very blessed to have such extraordinary scientists who are passionate about doing good science that informs good conservation and management," Burger said. "I hope Mississippi State University will continue to play a central role in doing the science that informs wildlife management and is implemented by our state agencies here in Mississippi and the Southeast and throughout the country."