You have permission to edit this article.
Edit
Home
About Us
Advertise
COVID-19
History
Life and Entertainment
Multimedia
News
Opinion
Sports
Subscribe
Staff
1 of 2 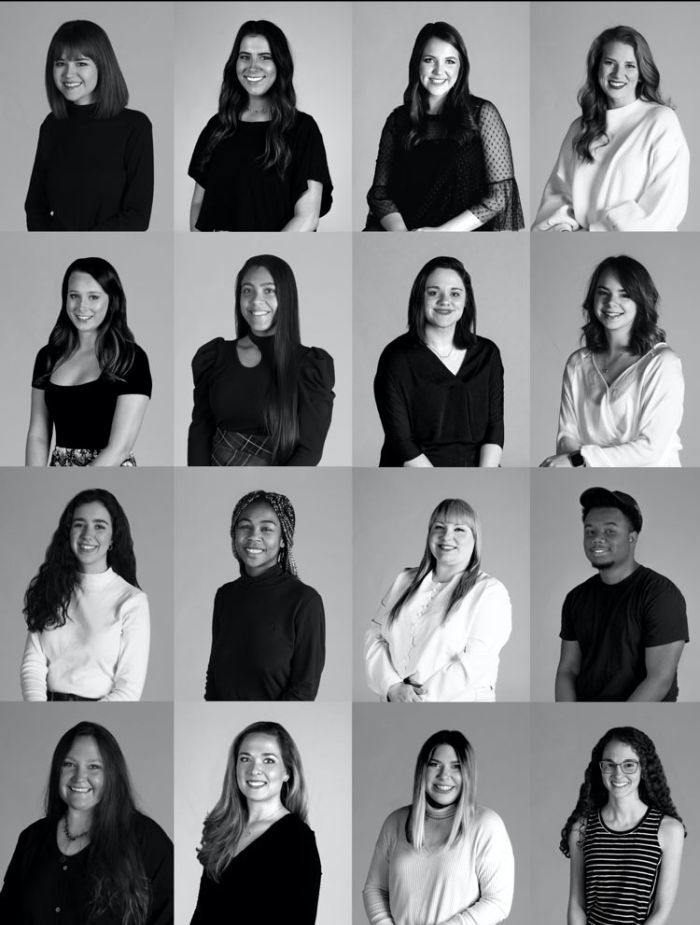 All 16 of these graphic design seniors have work featured in their senior exhibition, "All The Things". 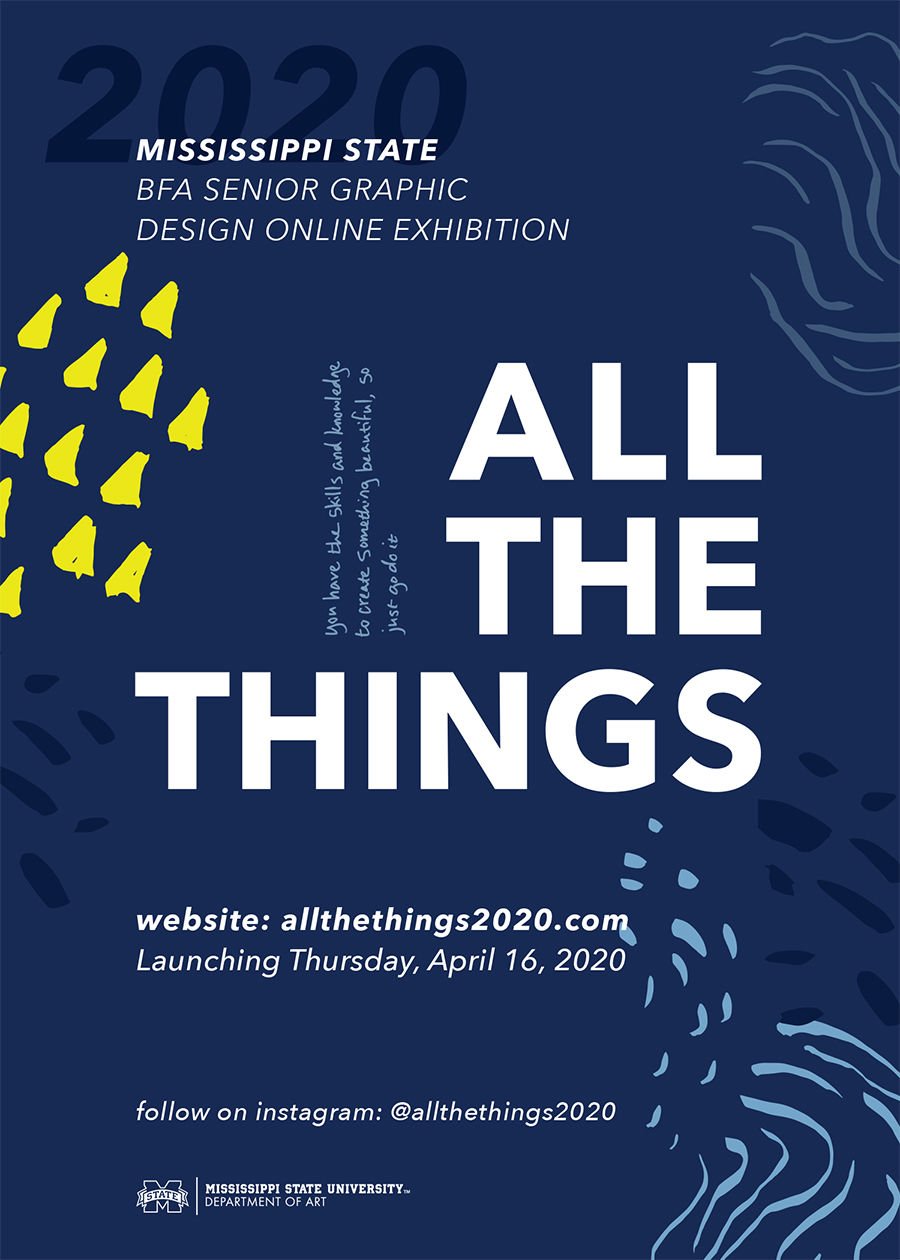 All 16 of these graphic design seniors have work featured in their senior exhibition, "All The Things".

In any given year, creativity is a defining trait of Mississippi State University's graduating class of graphic design majors. However, this year's group of seniors stretched the word "creativity" past the limits of a global pandemic, as they successfully transferred their senior exhibition titled "All The Things" online in a matter of weeks.

Claire Gipson, an assistant professor in the Department of Art at MSU, has worked closely with this year's graphic design students. Gipson shed light on the purpose of the biannual senior exhibition and why it is a monumental part of these students' experience in MSU's graphic design program.

"It serves not only to allow students to show off their best work to potential employers but gives them a chance to get together with their friends and family and celebrate all the work they've put into the last four years," Gipson said.

Amelia Dalton, a senior graphic design major at MSU and one of the 16 students featured in the exhibition, reiterated the significance this show holds for students.

"I remember as a freshman going to the graphic design senior show before I was even accepted into the graphic design program. It is a big deal for seniors because they go to celebrate all of their hard work with their friends and family. It's like a big pat on the back," Dalton said.

Amber Mabry is another senior graphic design major whose work is featured in the exhibition. Mabry found herself in a particularly unique position, as her role on the exhibition's web team gained magnitude with each passing day post-spring break.

"Before spring break we were on track to get everything done, and then, the coronavirus started popping up more and more. We were worried about it, but nobody thought it was going to get that serious. But after a couple of weeks, our teachers started coming to the realization that we probably weren't coming back. So after that, we started making the transition to make everything digital," Mabry said.

Mabry went on to describe how the shift from a physical showing to a virtual exhibition took place.

"At first the web team wasn't a huge part of it because we were mainly focusing on the physical exhibition. But then, the website became most of it, so we put in a lot of extra work to make sure it was a full-on exhibition on the website," Mabry said.

Gipson expressed how impressed she was with the way her students made this transition.

"I've taught this class a few times before, and we have a certain way that we do things and a way that we finish out. This definitely threw a wrench in things. But I have to say that somehow my students didn't miss a beat. They have been so level-headed and have gone into all these changes that we have had to make with a determination and a calmness that I have been very grateful for," Gipson said.

"All The Things" features the work of 16 seniors. From an illustrated deck of cards titled "Waste My Time Cards," to an Elmer's Glue campaign, to an Egg Bowl poster, the variety of design styles and projects are incredibly impressive.

According to Gipson, the wide assortment of creativity is an accurate reflection of the talent her students have displayed all year.

"There is so much talent in this group. I like that they all have their own design sensibilities and their own sort of take on things. They are all so different but have found it really easy to work together, even in this time," Gipson said.

Dalton is particularly excited about her project titled, "& crumpets." It is a Victorian-inspired cocktail lounge that Dalton has continued to expound on, designing menus, napkins and liquor bottles. This was a project which required adjusting since she could no longer access resources at MSU.

"I had so many different plans and things scheduled for that project specifically that I had to completely turn around. I had to figure out how to take photos without people, without models. I was literally in a photo studio with gloves on setting a timer on my camera. I was really proud that the project was able to come together," Dalton said.

Mabry is most proud of her project called "Homemaker Cocktails." The whimsical cocktail kit gives a satirical nod to sexist advertisements of the 1950s, with quotes like, "It's a man's world … so have a drink!" on the side of the kit.

While the virtual exhibition required a substantial amount of extra work, Gipson explained there are most definitely benefits to an online showing.

"I think it took more coordination and more thought to make sure that the experience of the website maintained some of the excitement that a gallery would have provided. But I think that more people have seen it, and it is more accessible to a broader audience. In the long run, I think it might help our students make connections," Gipson said.

Dalton has already experienced the extra exposure a website brings, as one of the design firms she contacted in Los Angeles sent her an email praising one of her pieces. To her, the show's significance lies not only in the prospect of future opportunities but also as a tribute to all the time the students have spent together.

Dalton is especially thankful for the community of students "All The Things" features and enthusiastically praised her classmates.

"These people have been a part of my life for four years now. We have grown so close. With other students, you go home from school and see your friends. But these are our friends. These are our family. I am so excited to see where everyone goes because we are all so unique in many different ways," Dalton said.

Gipson encourages other students and supporters to share the work which catches their eye when they view the exhibition.

"Social media sharing is the best kind of support because it is almost like word-of-mouth but online," Gipson said.